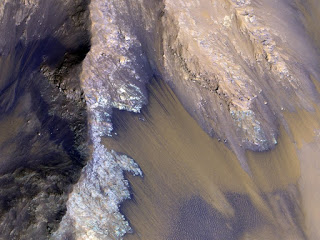 The MRO spacecraft (Mars Reconnaissance Orbiter) photographed furrows where they saw mineral salts that only exist in the presence of water. We are not talking of major rivers or streams, but tiny lines of salt water that are created during the summer Martians months.

These creaks were already observed in 2011, but scientists didn’t have any certainty that these were really traces of water.

We still do not know the origin and chemical composition of the water, but its presence alone leads to think about the possible presence of life, at least microbial, in it.

The thin atmosphere of Mars, however, does not allow the existence of liquid water except for a few second.

Where does the one that has left these traces come from? The most likely explanation is that it derives from the melting of underground ice, which has already been established by some special radar.