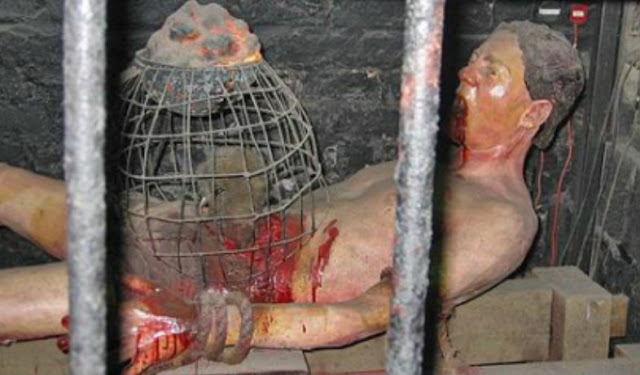 Mankind, we all know it, can be very resourceful especially when it comes to do evil. This is testified by the hundreds of torture methods invented since the beginning of the earliest civilizations.

What is the rat torture?

The rat torture was one of the methods used by the Inquisition to try to extract confessions from alleged witches and sorcerers.

In 1484 a papal bull by Innocent VIII gave way to a witch-hunt. Two years later the “Malleus Maleficarum” was written, which later became the official text of the Inquisition on the subject of witches.

If you’re more interested in the origins and history of the Inquisition, and want to know how real the stories they tell in school are, I recommend:

Let’s go back to the rat torture. Actually it would be better to speak about it in plural form, as I am aware of

at least two methods to torture one human being with one rat only.

The first method was easy to do: a rat was put into a cage. Meanwhile the victim was placed lying on a tripod or a wooden board, with hands and feet tied. Then they would lean the cage on the prisoner’s belly, removing the underside so that the mouse was in direct contact with the skin of the victim. Later on a burning brazier or any other heat source were put on top of the cage.

At this point the mouse, in an attempt to get away from that much heat, would begin to scratch and bite the skin and flesh of the victim, eating them alive.

This torture caused excruciating pain and could last for a very long time before death came.

Even the second method was easy to perform, because

A rat was simply inserted into the anus or the vagina of the victim with the muzzle facing the internal organs, and then the orifices were sewed.

As with the first method, the rat would try to get out and be free in every way possible, and in order to do so it would scratch and bite tissues and internal organs of the victim causing internal bleeding and excruciating pain.