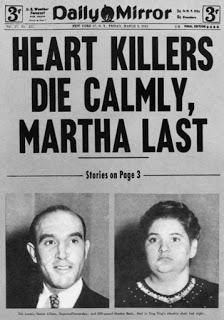 Raymond Martinez Fernandez and Martha Jule Beck were a couple of American serial killer, known as the honeymoon killers. This nickname is due to the fact that Raymond promised to marry the victims, but he murdered them instead.

Raymond was born in 1914 in Hawaii by Spanish parents who moved to Connecticut shortly after his birth. Not much is known of his childhood and adolescence, but as an adult he moved to Spain, where he married and had four children.

However, he abandoned the family and served both in the Spanish Merchant Navy and the British Intelligence during World War II.

After the war he had an accident in which he fractured his skull and hit his frontal lobe. This trauma may have been the reason of his social and sexual behavior.

After the incident he was brought to the hospital and cared for, but after his release he was arrested for a petty theft. In prison, his cell mate taught him voodoo and black magic that, according to Raymond, would give him an irresistible charm with women.

After serving his sentence he moved to New York where he began to answer to lonely-hearts ads, seducing women and then robbing them.

He was never arrested for these thefts because almost no woman reported him,as they were too ashamed.

Martha was born in 1920 in Florida instead. She was always overweight, which was attributed, as it often happened at the time, to a glandular problem, and this caused a precocious puberty.

She declared that she had been raped by her brother and, after telling what happened to the mother, she was held responsible for the fact and beaten.

After finishing high school she studied to become a nurse, but struggled to find work because of the fact that she was overweight. Therefore she became an undertaker’s helper and then, during the war, a nurse at a military hospital where she had many sexual relationships, getting pregnant.

The girl’s father did not marry her, and Martha told everyone that the father of the creature in her womb was a soldier who died in battle. Later she got pregnant from a bus driver, they married in haste and divorced six months later.

In 1946 she found a job in a children’s hospital, and in 1947 she wrote an ad in a lonely hearts’ magazine, and Raymond answered to her message.

The murders of the honeymoon killers 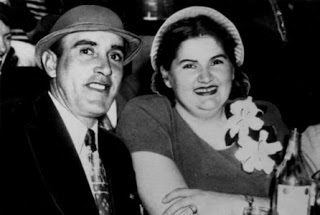 Raymond went to see Martha and stayed with her for some time. Martha told everybody that they were about to getting married and, while she was organizing the wedding in
Florida, Raymond returned to New York.

Shortly after she was fired and decided to abandon her children to re-join her beloved.

Raymond thought the fact she had abandoned her children to be with him was a sign of unconditional love and confessed his crimes. Martha was not shocked in the slightest and indeed wanted to actively participate in the subsequent theft.

Raymond continued to respond to the ads and Martha pretended to be his sister, giving him more credibility in the eyes of the victims.

Martha, however, was extremely jealous and did everything to prevent Raymond and his victims to have sex. When this happened, her reaction was violent.

In 1949 they carried out their first murder. Raymond had responded to the ad of a 66 years old woman, Janet Fay, who went to live with him.

Martha discovered them in bed together and, blinded by jealousy, took a hammer and smashed Janet’s skull. Raymond finished her by strangling her

and taking away the body but the victim’s family began to have suspicions.

The couple moved to another state and met a young widow, Delphine Downing, who had a two-year-old daughter. One day Delphine was ill and Martha gave her pills to calm her down.

As she recovered in bed, her daughter began to cry and Martha, irritated, strangled her without killing her.

Frightened by the reaction the woman could have had at the sight of the small bruises on the daughter’s neck, Raymond decided to shoot her in her sleep. 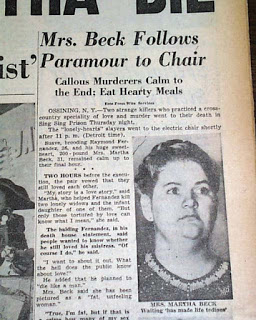 The couple remained in the house for several days until Martha, irritated by her crying, drowned the girl in a sink. They hid the bodies in the basement but the neighbors were already suspicious by the absence of Delphine and they called the police who went to the place and arrested the couple.

The state they were then was Michigan, who did not have the death penalty so Raymond confessed thinking that this would save him from extradition to New York. He was mistaken, both were extradited and Raymond tried in vain to retract his confession.

They were accused of 17 murders, but the only one for which went to trial was that of Janet Fay.

The honeymoon killers were sentenced to death and were executed on 8 March 1951 with the electric chair.

During the trial they professed their love for each other and their last words were also of love.

From this incident some movies were made, I personally have seen and liked “The Honeymoon Killers” (1969) that I would recommend to everyone. 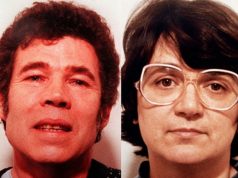 The incest and torture of Fred and Rose West