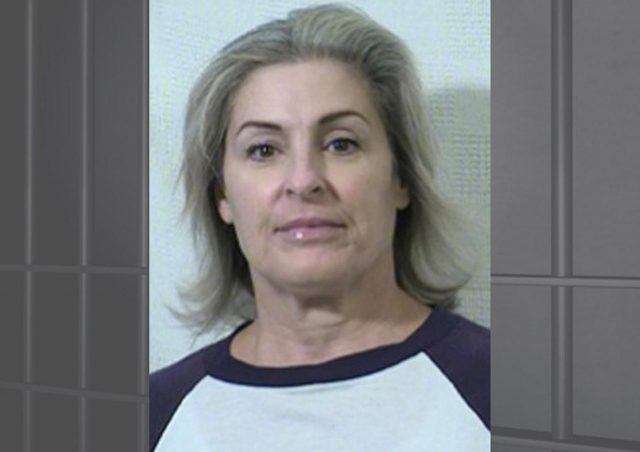 Death Row. This is the section of U.S. prisons in which those sentenced to capital punishment – in those states where such legislation applies – await the day of their execution. Days, months, years, decades. Yes, decades: contradictions and distortions of the american justice that water down a penalty – the death penalty – that, on the contrary, should be applied very quickly and rapidly so that it can best exercise its ruthless effectiveness.

Hopes of a resounding reversal of sentences or resignation in the face of incontrovertible factual evidence are the moods that mix and alternate on Death Row.

Kerry Lyn Dalton has been on Death Row for over 23 years. A case in which the protagonist is the woman just mentioned, who still makes us talk about her, at the centre of unceasing controversies which have produced a movement in favour of Dalton, as well as further undermining an investigative and judicial system that is avant-garde but not without obvious flaws and faults.

Why was Kerry Lyn Dalton sentenced to death? Here are the facts.

Live Oak Springs, California. It is in this remote area of California that the drama we are going to tell is consumed. An episode that is the result of a social degradation made up of families in ruins and in disarray, immoderate consumption of drugs, characters who act illegally.

Irene “Melanie” May, 23, is a mother of three children. Courts and social services, however, prevent her from exercising the role of mother.

But that’s nothing. Irene is a compulsive consumer of methamphetamines. She has no home and no future. She lives in the home of Kerry Lyn Dalton, who is also a drug addict.

Dalton is an irascible, “destructive” woman, as she has been juxtaposedly called; a character trait further emphasized by the use of drugs.  She has a boyfriend, Mark Lee Tompkins, a sort of puppet in the hands of Kerry Lyn, also consumed by the use of various drugs.

Dalton is arrested for possession of drugs. Irene May, at this point, has a clear field. She squanders her money on drugs. She even goes so far as to sell her few belongings and what she finds in Kerry Lyn’s house. Among them, Dalton’s jewels. A mistake that will be fatal to her. When Kerry Lyn leaves the prison and returns home, the bubble blows up ferociously.

Kerry Lyn is furious. The woman’s revenge on her roommate is as unpredictable as it is inhuman.

On June 26, 1988, Kerry Lyn Dalton staged the crime that would open the doors of the Death Row. Irene May, now aware that she is at the centre of Kerry Lyn’s deadly and bloody wrath, feels overwhelmed. She tries to deny the facts, the sale of Dalton’s assets, but the latter, however, is prey to a spiral of irreversible hatred. Then a game begins, a macabre game.

Irene May, forced into a chair, is repeatedly tortured. Also present at the torture are Mark Lee Tompkins – Kerry Lyn Dalton’s omnipresent boyfriend -, a friend of hers, Sheryl Ann Baker, and a third man known only by the name of George. Irene May is sadistically tortured for hours: first with electricity, then with a metal frying pan (on her head and other parts of her body, until the bones fracture).

Then, Kerry Lyn leaves for a moment leaving Irene in the hands of the other three torturers. When she comes back to the victim she has a syringe in her hand, containing acid from the car battery. A painful and poisonous injection. Mark, the faithful boyfriend, kills Irene May for good: stabs in the throat end the girl’s life.

The broken silence, the verdicts and the mystery about Irene May’s corpse

The facts of 26 June 1988 seem to be archived, concealed by a thick blanket of silence. In 1992, however, someone spoke and denounced. The case explodes in all its roar. On May 14, 1992, Kerry Lyn Dalton was arrested. Sheryl Ann Baker was arrested and sentenced to 15 years’ imprisonment for murder in the second degree. Mark Lee Tompkins is sentenced to 25 years in prison for first-degree murder. Kerry Lyn Dalton was found guilty of first-degree murder: on 23 May 1995 she was sentenced to death by lethal injection. Today, the woman is 59 years old and is detained in the Central California Women’s Facility in Chowchilla, California. 23 years of oblivion awaiting execution.

The doubts, contradictions and dark sides surrounding Irene May’s murder are evident from the earliest stages of the trial. Murder? There are those who claim that it was an alleged murder, a so-called murder. A crime that never happened.

Kerry Lyn Dalton, in fact, has always professed herself innocent. But that is not enough.

A corpse is missing, the corpse of Irene “Melanie” Louise May. Lack of a corpse, of weapons of crime, of a crime scene. Lack of death certificates: public documents testify to this curious fact. The research, which covers a deliberately extended period of time from 1905 to 2017, has not led to any results: it almost seems that Irene Louise May never existed. Dissolved in nothingness, a ghost.

The body, according to testimonies and investigative suppositions, was first torn to pieces by Tompkins and George, then disposed of by the two men within an Indian reserve, so that it can no longer be found. Even one of the victim’s husbands refused to cooperate with the authorities, claiming, among other things, to have seen the woman again a few months after the alleged murder.

Is there, then, a blatant miscarriage of justice and a purely circumstantial trial based on unreliable testimonies and equally unlikely stories altered and distorted by the use of drugs?

Is Kerry Lyn Dalton really innocent, as she claims? The sheriff who intervened on the evening of the alleged murder notes that the call made by the houses (burglary) was recorded under the code “5150”, designed to indicate emergencies from people unable to understand and want and to understand the reality.

Since 1995, Dalton’s legal battle – supported and supported by relatives and by an innocent movement in solidarity with her – has not diminished in intensity towards investigative and judicial authorities, guilty – according to Dalton – of having sentenced an innocent woman to death. In particular, at the center of the controversy is Jeff Dusek, Chief Deputy District Attorney, County San Diego, California, accused by Dalton of intentional misconduct.

The case that revolves around the figure of Kerry Lyn Dalton, evidently, is anything but a simple resolution. On the one hand, in fact, we have a shady history of torture culminating in a heinous murder, on the other a woman – Kerry Lyn Dalton, the executioner – who claims to be innocent and a trial without a dead body.

Kerry Lyn Dalton: a torturer on Death Row or an innocent woman awaiting an unjust death sentence? Write your opinion in the comments below.