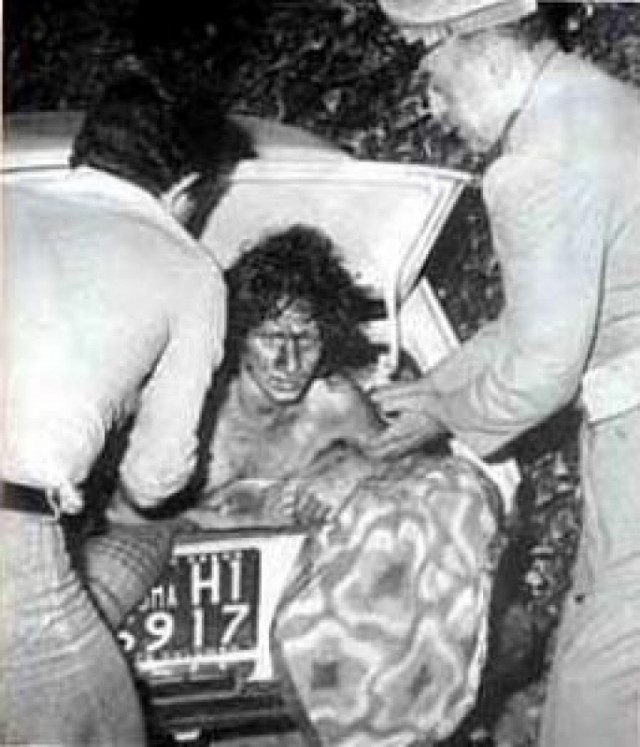 The Circeo massacre is a true crime story and refers to the kidnapping and torture inflicted by three young far-right men to two girls aged 17 and 19 years, one of whom was killed by her captors. The other miraculously saved herself by pretending to be dead.

The men responsible for the massacre are Gianni Guido, 19, Angelo Izzo 20, and Andrea Ghira, 22. At the time of the massacre Gianni Guido was the only holding a clean record while Izzo and Ghira had already had problems with the law.

Andrea Ghira was a wealthy young man, son of a famous Roman businessman. His troubles with the law already began when he was 16,as he took part in a far-right event and for this he got a conviction for seditious protest. In 1972 he was denounced for armed threat and aggravated injuries and in 1973 he was arrested and sentenced to five years for armed robbery and housebreaking, done together with Izzo.

Even Izzo was a wealthy young man who lived in Rome in the Parioli neighborhood, one of the most luxurious of the city. Already at the age of 13 he enrolled in an association of right wing students and used politics as an excuse to do what he liked the most: rape, steal and kill.

Even before the Circeo massacre, he had raped two women, receiving a sentence of two and a half years but serving only a few months.

Rosaria Lopez was a nineteen-year-old bartender and Donatella Colasanti a seventeen-year-old student. Thanks to their acquaintance, Carlo, they met Guido and Izzo and spent a pleasant afternoon chatting in a bar. The two boys invited Rosaria and Donatella to spend time together the following day, but Donatella couldn’t so they arranged for the coming Monday. The girls were invited to a party held in the villa of one of Guido and Izzo’s friend, Andrea Ghira.

Even a third girl had been invited, but she had decided not to go to the appointment.

The girls went to the appointment at four in the afternoon on September 29, 1975, and only Izzo and Guido were present. The boys said that Carlo has invited them to spend the afternoon at his villa in Lavinio, in the province of Latina. As they drove to Lavinio, Gianni stopped in a bar, he said, to call Carlo and when he got to the car he told his friends that Carlo had gone to the seaside, but had given them permission to go to his house and
spend the afternoon there.

The villa was at the Circeo and it was not Carlo’s, but Andrea Ghira’s.Once there the young men asked the girls right away to have sex with them, but Donatella and Rosaria refused. Guido then pulled out a gun and claimed to be part of the Marsigliesi gang (an Italian mafia gang operating between Italy and France during the 70s), and ordered the girls to obey his orders. He also said their leader Jacques Berenguer, was on his way there, a very tough man, and that they would not have stood a chance. The two young women realized they were trapped.

Guido and Izzo raped them and then locked them in the bathroom while waiting for Jacques, who was in fact Ghira. They left them there all night and the next morning Izzo, when he went into the bathroom to check on them, found the sink broken. This caused him a violent rage and he started to beat up the two girls.

Then Donatella and Rosaria were separated and a hell of beatings and violence began.

Towards evening Ghira arrived, claiming to be the Marsigliesi leader and that he would have brought them to Rome. Instead they were drugged with three injections each, but the two didn’t fall asleep. Rosaria was then taken into another room in order to use “chloroform on her”. Donatella actually heard her crying and shouting for several minutes and then, suddenly, silence. They had killed her drowning in the bathtub.

Then they approached Donatella and hit her to the ground with the butt of the gun, leaving her dazed. Then they tied a noose around her neck and dragged throughout the villa to strangle her. The girl fainted but didn’t die.

and then hit her again in the head, this time with an iron bar. Then she understood that the only way to save herself was to pretend to be dead. The three guys fell for it and put her together with the corpse of Rosaria in the trunk of their 127 car and then went to Rome to dine in a restaurant. During the trip Donatella heard her tormentors laughing and joking and saying, “Look how they sleep well these two” and “Shut up, that there are two dead bodies here!”

Then they parked the car along Pola road and walked away from the car. Donatella screamed and managed to draw the attention of a watchman, who alerted the police. The police sent an encrypted message to a patrol; this message was also intercepted by a photojournalist who was present at the arrival of the police, and who took photos of Donatella as she was taken out of the trunk.

Guido and Izzo were arrested shortly after while Ghira managed to escape. Donatella was hospitalized with serious physical injuries but with even more serious psychological wounds, from which she never recovered. 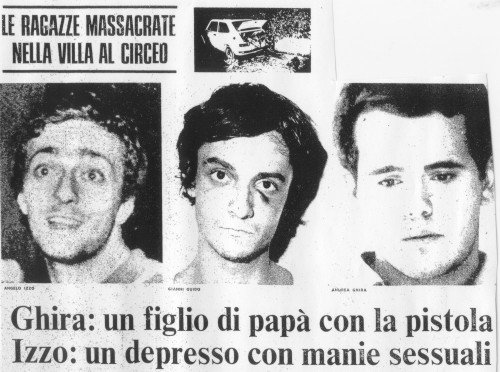 The three were tried, Ghira in absentia, and sentenced to life imprisonment. Ghira fled to Spain, changed his name to Massimo Testa de Andres, and he enlisted in the Foreign Legion, from which he will be expelled in 1994 for drug abuse. He died from an overdose in 1994 and the body was officially recognized.

However, there are still doubts and someone thinks that he might still be alive. In 1995 a picture was taken by the police on the outskirts of Rome with a man walking. Analysis has confirmed that this was indeed Ghira.

Guido and Izzo were sent to prison in 1977 and tried in vain to escape.  Guido, on appeal, got his sentence reduced to only 30 years in prison, from where he escaped in 198. He run off to Argentina and then to Panama, where he was captured in 1994. Ten years later the judges decided to release him on probation, during which he killed two people. In 2007, he was sentenced again to life imprisonment.

Gianni Guido was entrusted to social workers in 2008 after only 14 years in prison. Thanks to a reduction in his sentence he has been free since 2009.