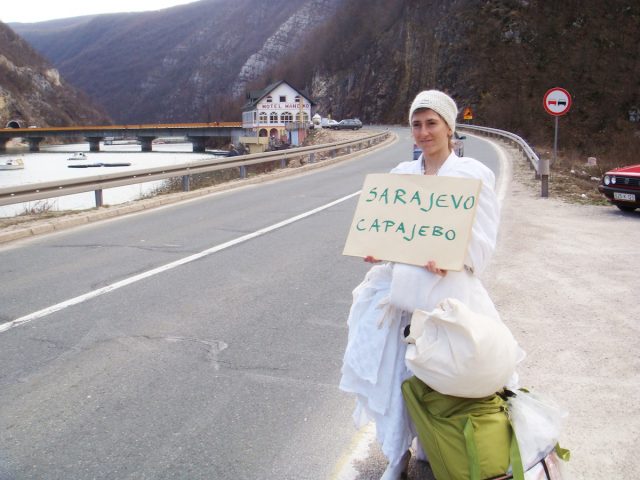 I want to tell you the story of Pippa Bacca, an Italian artist who was killed in Turkey in 2008, when she was 33.

Perhaps, this is not a well-know murder, but I remember it well; I remember I was quite shocked when the news that she had been found dead after having disappeared broke.

This sad news let me very upset and for several weeks I found myself thinking about this young lady, who was now dead because she trusted other human beings too much.

Pippa Bacca was the pseudonym used by Giuseppina Pasqualino di Marineo: she was the niece of the artist Piero Manzoni and an artist herself.

Pippa was an extrovert and exuberant young lady; she loved life and the colour green. In her works, she mainly transformed other objects, often simply by using a pair of scissors.

It is indeed while working on one of her artistic projects with a friend that Pippa Bacca met her death. 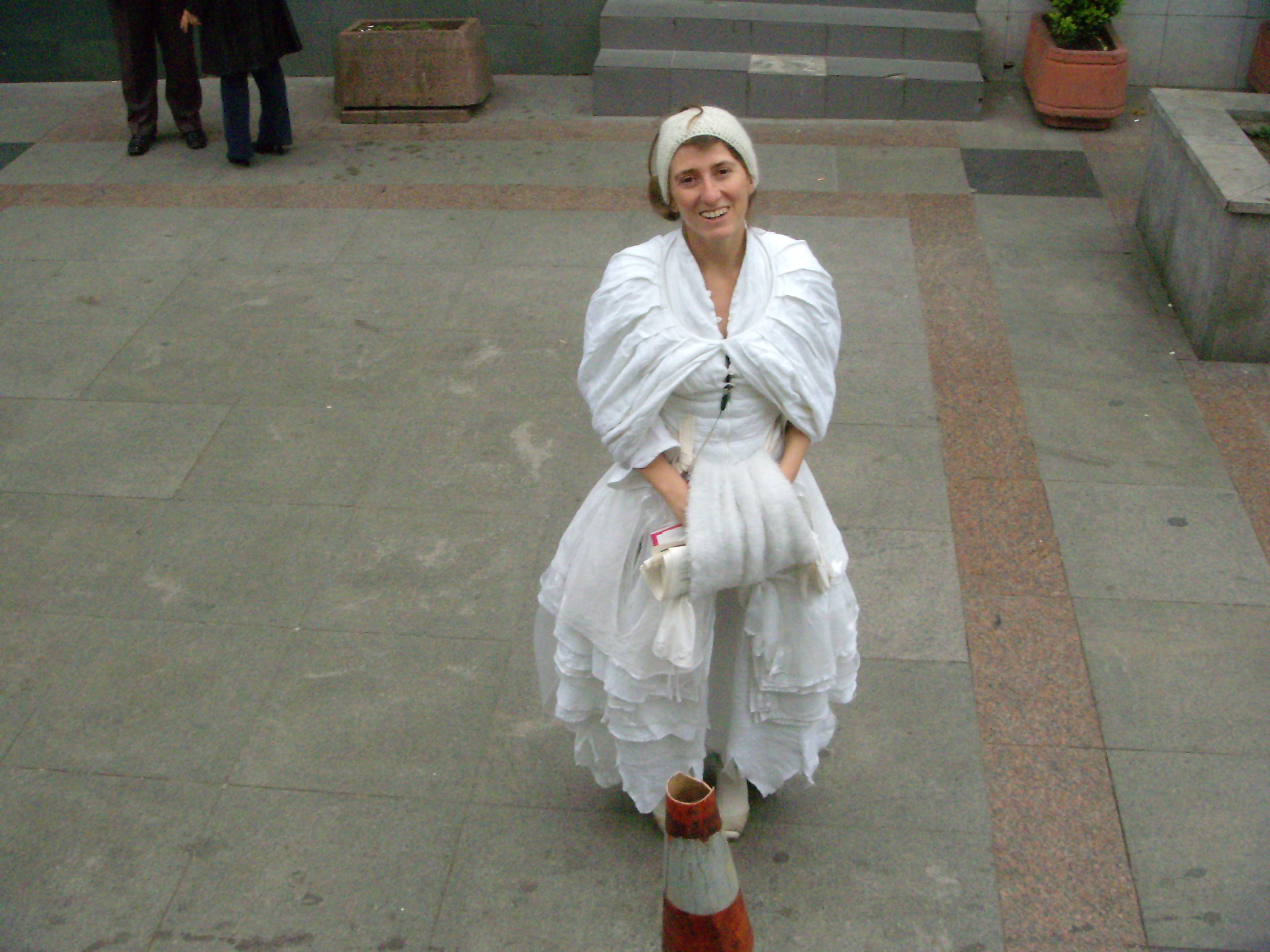 Pippa and her artist friend Silvia Moro wanted to complete an artistic tour:

they were supposed to hitchhike through 11 war-torn countries while wearing a wedding dress to promote peace and trust in the other. The same trust that got her killed.

‘The only things that scare me are cold weather… and ferocious animals, but I don’t think there will be any where I am going’

says Pippa during an interview released before her departure. Unfortunately, she was about to meet something even more dangerous than a ferocious beast: another human being.

The two artists left Italy on March 8th 2008. They travelled through Slovenia, Croatia, Bosnia, and Bulgaria and reached Turkey on 20 March 2008.

Pippa and her friend split up after arriving in Turkey, aiming to get together again in Beirut and then continue their tour visiting Lebanon, Syria, Jordan, Cis-Jordan, Israel, ending their journey in Jerusalem.

Unfortunately, Pippa was never to leave Turkey. On March 31st, she got a lift from Murat Karatash, a 38 year-old man.

Murat took Pippa to Gebze, where he stripped off her clothes, raped her, and strangled her. He then dumped her body in some bushes and covered it with soil, in an attempt to disguise it.

A few days later, when Pippa’s relatives and Silvia could not get in contact with her, Pippa’s family raised the alarm.

Pippa’s boyfriend and her sister immediately took a flight to Turkey, and started making a plea for help through local television channels and putting up flyers with Pippa’s picture on.

The Discovery of Pippa’s Body 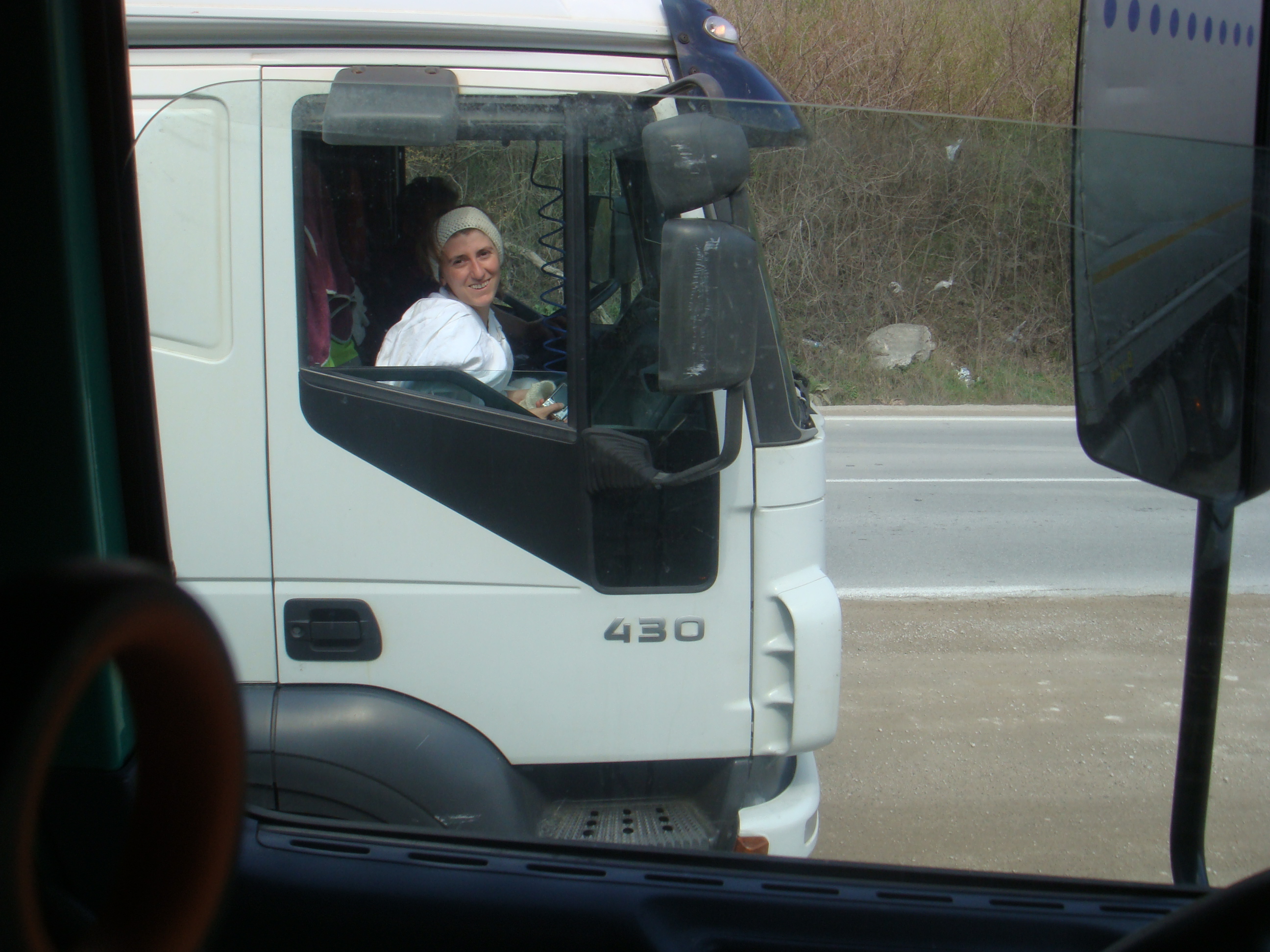 A gas station attendant remembered seeing a woman wearing a bride dress getting in a car with a man. The CCTV cameras showed images of the man and the car.

It was easy to trace the man, as he had been already convicted for theft in the past. Furthermore, the man made a mistake and placed his SIM card into Pippa’s mobile phone, making it even easier for the police to trace him.

During his interview with the police, the man confessed to having raped and strangled Pippa on the same day they met.

This murder shocked both the Italian and Turkish public opinion. Many Turkish newspapers apologised – even by writing in Italian – on their cover page.

Murat was sentenced to life, but his sentence was then changed to 30 years in prison. He never expressed any regrets.

Pippa’s trust in people got her killed.

Our dream is to hitchhike through those war-torn countries who might still facing the conflict’s troubles. A rather brave journey, I know, the journey of two beautiful brides, ready for a wedding that perhaps had already taken place, perhaps will not take place, or perhaps is represented by this journey itself 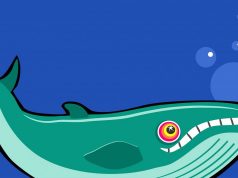