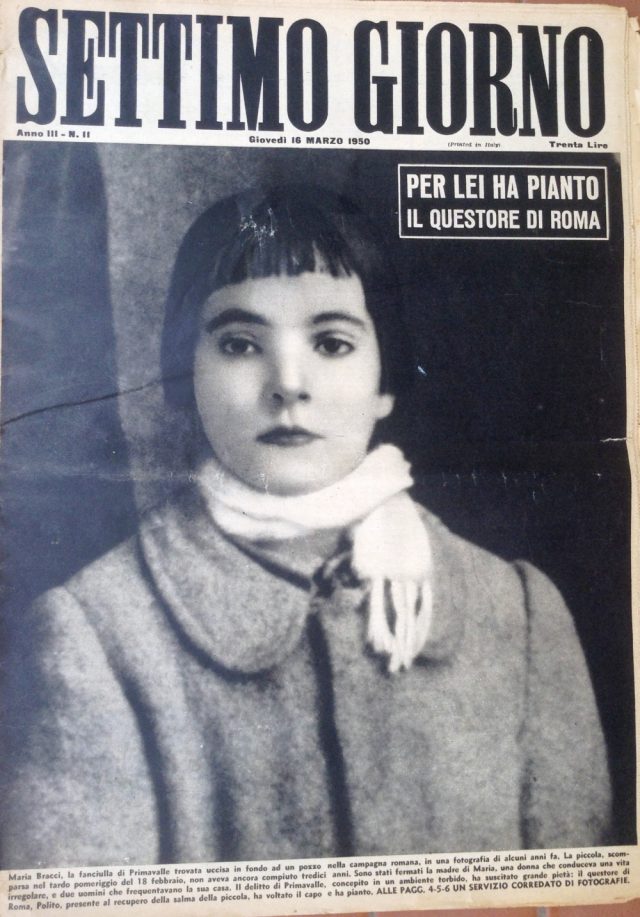 Those born and raised in Rome know the Primavalle district well. “Borgata”, using a popular, immediate, still widespread term. A district with an intense history, even fascinating and interesting, certainly troubled. The streets and houses exude marginalization, degradation, social and economic hardship in the shadow of an urbanism that soon developed without brakes, rules and control. Dormitories abandoned to themselves. A densely populated area, which has now been sufficiently redeveloped, but which, in the past, was the site and theatre of delinquency and news stories that have gone down in history. The murder of Annarella Bracci is one of them.

Who is Annarella Bracci?

Via Lorenzo Litta is a Primavalle street, now interposed between Via Pietro Maffi and Via Pietro Gasparri. Lookalike buildings, aesthetically pleasing at best, stand on the edge of this narrow street. In 1950, this area was even more on the edge of Rome, physically and socially. A capital in rapid expansion but which, like any other metropolis, reveals peripheral “pockets” of degradation.

Anna Maria Bracci, known as Annarella, lives in Via Lorenzo Litta: lot 25, stair L. People’s homes. She is still 12 years old: in fact, she was born on 15 December 1937. Annarella lives in the modest apartment in Via Lorenzo Litta, together with her brothers and mother, Marta Fiocchi, separated from her father, Riziero. A humble, very humble family. The problems are many, starting with the health of one of the brothers, Mariano, with an amputated leg. He will die shortly thereafter.

The mother also works as a prostitute at home. The money, earned in every way possible, is barely enough for the indispensable sustenance of a large family. Annarella is at that age – very delicate – halfway between childhood and the dawn of adolescence. The precarious and degrading social conditions of the Bracci family meant that Anna Maria began, in the first person, to contribute to the finances of the house. She starts a few jobs, commissions that guarantee her a few lire. She does housworks and she tries to ennoble her own existence through simple but honest work.

February 18, 1950 is a day like any other. A Saturday. Annarella, in the late afternoon, left the house to go and buy some coal and collect some oil and pasta from another family in the area, the Bernardini. She has an empty bottle with her. The girl reaches the Bernardini, takes a little lard, then goes back to the streets of Primavalle. Via Nicolò Albergati (the current name of the street where the charcoal burner’s shop was located in 1950), Via Federico Borromeo: roads that today embrace the Anna Bracci Park.

Around 20:30, the girl disappears. There is no news of Annarella. Vanished, into thin air.

But a little girl disappeared in a remote village in the suburbs is not news. Nor sparks the interest of the Police: they know Primavalle well, a land where “State” and “legality” are abstract concepts, absent, longed for but opposed at the same time. It’s just a little girl who disappeared in a village in the countryside of North Rome, bleeding with degradation and delinquency. She’ll come back sooner or later. The press, at first, does not care.

The case of Annarella Bracci, however, arouses clamour among the inhabitants of Primavalle. A clamour initially limited to the streets of the village but which, in a few days, expands thunderous and desperate throughout the capital. The newspapers begin to deal with what happened. The police, on the wave of the first, timid media attention, begins to investigate. We are now at the end of February. The research begins, intense and incessant. All of Primavalle has gone through a sieve; the support of the citizens is praiseworthy.

At the same time, the detectives questioned the family and the last people who saw Annarella. Meanwhile Lionello Egidi, known as “the blonde”, emerges strongly. The man, in fact, has been seen talking to Annarella around 20:00: he offers her money to buy a handful of chestnuts. 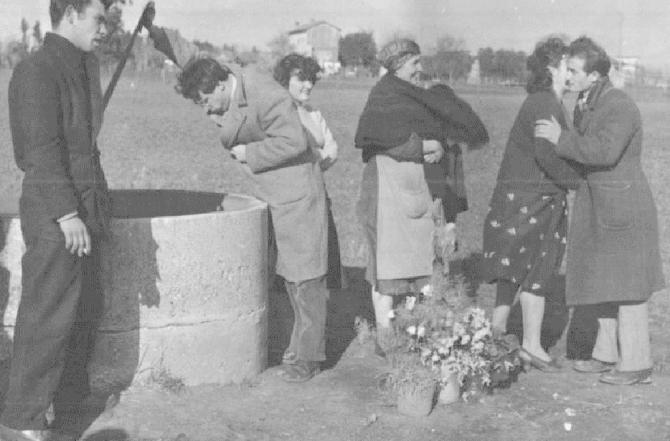 It’s the night of March 3, 1950. The police, after focusing their searches in correspondence of today’s Via Cogoleto-Via la Nebbia, came across the lifeless body of Anna Maria Bracci. At the time this area – the newsreels called it simply Torrevecchia – was in the open countryside. Annarella Bracci’s body was found at the bottom of a well: today, in the same spot, there is a petrol station.

The autopsy doesn’t lie: Annarella Bracci was killed. Hits to the head and the tenacious resistance unleashed by the young woman. The killer throws her in the well, perhaps thinking she was dead: here, Annarella dies from drowning. Probably an attempt at rape.

Rome, like Primavalle, is a city in mourning, struck straight to the heart. The funeral, paid for by the City of Rome and celebrated with great pomp, saw the participation of thousands of people. Mixed tears and revenge.

Lionello Egidi, the main suspect, is stopped. We are already at the end of February.

It was March 10, 1950, when Lionello Egidi, “er biondino” (the little blond man), confessed after two weeks spent behind bars. The case seems closed. A laborer, a gardener, he is the subject of accusations of harassment of other adolescents, which are hanging over him (and will continue to be so in the future). Egidi confesses but then retracts: confession extorted with bad manners in order to feed the Nation the culprit of such an atrocious crime? Perhaps. Furthermore, probably Lionello affirms the truth.

The fact is that Primavalle “rebels” against Lionello’s arrest. Judicial error, they say. The trial in first instance, in January 1952, acquitted Lionello Egidi: lack of evidence. The Appeal – dated 1955 – sentenced him to 26 years and eight months of imprisonment (in the meantime, he harassed a young girl: another 3 years), but the Supreme Court, in December 1957, overturned the previous outcome: acquittal. For the last level of judgment, therefore, the condemnation of Egidi was a judicial error, flawed and incomplete.

In 1961, Lionello Egidi was again in the grip of Justice. He was sentenced to 5 years in prison for sexual harassment of a child.

Lionello Egidi, therefore, turns out to be a serial molester. Yet, the man denies it and will always deny it. He also denies having harassed the girl, more than 10 years after the facts of the crime of Annarella Bracci. Where, then, the truth?

The “Annarella Bracci case” remains, to this day, without a culprit. An unsolved case, an expression – probably – of an investigative and, above all, judicial process that is failed, spoiled, in which doubts and questions multiply in spite of the few certainties. Was Lionello Egidi really the murderer of Annarella Bracci? A question, still today, without an uncontrovertible verdict.

The memory of Annarella, among the streets of Primavalle, still echoes, alive. A park, graffitis, various initiatives aimed at keeping alive the memory of this child made prematurely adult by a life of hardship and degradation.

Since 1950, public opinion – now watered down and increasingly distant in time from those cold days of February – has been divided into the most classic of the opposing factions, guilty on the one hand and innocent on the other.

A diatribe that will never end. The murder of Annarella Bracci will never have a guilty party handed over to Justice, never a fine word and a shared epilogue. He will remain, forever, a sad, restless Italian “cold case”, without peace or end.