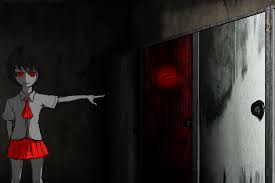 Toire no Hanako (“Hanako of the toilet”) is a Japanese urban legend, spread in every prefecture of Japan. This legend is based on the spirit of a little girl, Hanako, who is said to inhabit elementary school’s bathrooms.

The story of Toire no Hanako

This urban legend became viral in the 90s but it is thought to date back to the 50s. There are various versions depending on the area, but the most common one is the following:

Toire no Hanako would be the spirit of a little girl, with a bob cut and a red skirt, who is said to have been killed by her parents, or in an air raid during World War II, or even who committed suicide in a school bathroom.

In any case she seems to live in third cabin of the girl’s bathroom on the third floor. She seems an almost benign spirit and some say she protects the school from evil ghosts.

If you want to avoid her anyway, just stay away from the third cabin bathroom on the third floor or, once you meet her, just showing your good grades at school will make her disappear.

According to another version if you knock on the cabin three times and ask “Hanako, are you there?” you can hear a voice saying “Yes, I am here”, then the door would open and Hanako would drag you into the toilet with her, straight to hell.

Some students were so scared by it to show bladder problems because they refused to go to the bathroom during school time. 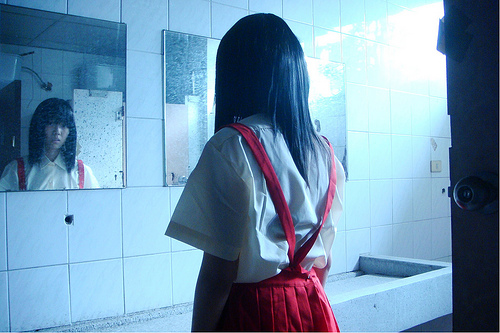 Toire no Hanako is not the only Japanese legend set in a bathroom. This comes from the belief that spirits, if present in a house will be hiding in the smaller room.

Also in Japan, again for reasons of superstition, the bathrooms are always located in the darkest part of a house.

This may be due to the ancient superstition that the wells were inhabited by spirits and with the advent of modernity the wells have been replaced by toilets.

Another legend about toilets is the one about Aka Manto (“Red Coat”), who is said to be a spirit that haunts the public toilets.

Another one also tells of a spirit that haunts school toilet and it is in fact a boy named Yousuke who, once invoked, will stick his bloody hand out of the toilet.

Another one again tells of the spirit of a girl with no legs who haunts the toilets looking for her legs.

On the Hanako-san legend, several movies were made in Japan, three in the nineties and one in 2013.