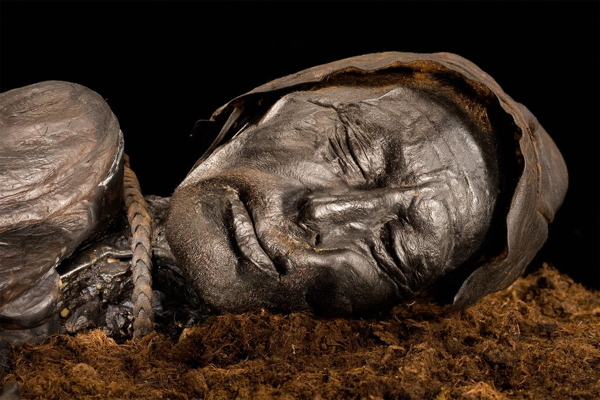 The bog bodies are mummies preserved in the peat bogs, often found in northern Europe, Great Britain and Ireland.

Thanks to the particular soil conditions, the low temperature and the absence of oxygen the bog bodies have skin and soft tissue very well preserved but they are almost always without a skeleton.

This is because the soil dissolves the calcium carbonate of the bones. Another side effect of conservation in the peat bogs is that the skin takes on a darker color and the hair turns reddish. Many bog bodies have relation with the Celts, and death appears to have been a violent one, probably a human sacrifice. Here are some examples.

The Clonycavan man was found in Ireland in 2003 during some work in a bog. The mummy only has the upper body, the lower was probably torn by the machinery.

The mummy presents some injuries on the skull and face, probably inflicted with an ax, which suggests a human sacrifice.

The death is estimated between 392 BC and 201 BC and the body then remained preserved for approximately 2,300 years. A distinctive feature is the hair, held up thanks to a natural gel made from plant resins imported from southern France or northern Spain. This indicates that even at that time there was trade between the United Kingdom and Southern Europe, and that the mummy must have been wealthy to be able to buy imported cosmetics. His hair was perhaps brought in this fashion to make the man look taller, since his height was 157 cm.

The Grauballe man was found in Denmark. The hair, beard and nails are very well preserved as well as the skin.

The fingers are so well preserved as to be able to distinguish fingerprints.

The man was about thirty and his death would have taken place around about 290 AC. He got his throat slit from ear to ear, and is thought to be a human sacrifice. The mummy has no clothes and that means that he was killed completely naked or that the clothes deteriorated with time.

The Tollund Man is a bog body found in Denmark in 1950. The body is so well preserved that when discovered it was thought to be a recent murder victim.

In fact the Tollund man would have died about 2,000 years ago as a sacrificial victim.

The man was about 40 years old and 1.61 meters high, considered a short stature even for that time. A rope was found around her neck and medical examinations confirmed his death was done by hanging. The mummy is now on display at the Silkeborg Museum in Denmark.

The Bocksten man is a bog body of a man who lived in the Middle Ages, found in a peat bog in Sweden. He was a tall man, about 170 cm tall, and the internal organs who are preserved only parts are intact of the lungs,liver, brain and cartilage.

His clothes are remarkably well preserved and his tunic is the best preserved medieval tunic in the world.

In addition to the tunic he wore a cap with a long string, a shirt and a coat and his feet bore socks. He also wore accessories like a leather belt, a sheath and two knives. The man would have died between 1290 and 1430 at the age of 35 or 40 years. 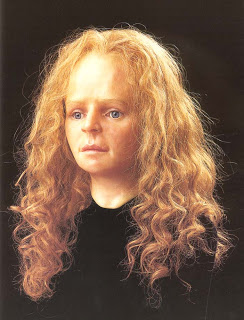 The Yde Girl is a bog body found in 1897 in the Netherlands. It was found in good condition but after a lack of care while storing it, the body deteriorates a lot. The girl would have died at the age of about 16 years in a period between 54 AC to 128 AC.

Very well preserved are her long reddish hair. The girl was wearing a woolen cloak and was found with a rope around the neck suggesting, as in other cases, of a human sacrifice.

Using forensic techniques the face that the girl would have had has been rebuilt many times.