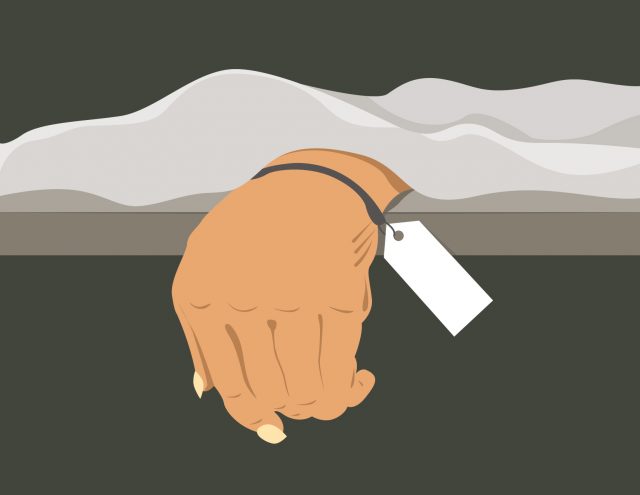 Karen Greenlee is a necrophiliac: this means she reaches orgasm by engaging in sexual acts with corpses.

Necrophilia is one of the paraphilia that most intrigues us, but unfortunately it is difficult to study because the subjects who suffer from it tend to not declare it as it happens with other paraphilia.

There are not many books about it. One of the few available is: Grave Desire: A Cultural History of Necrophilia, which explains necrophilia throughout history and analyzing the lives of  necrophiliac like Karen.

Karen became famous in 1979 when, at age 22, she was driving the hearse of the agency she worked for, but

Instead of bringing the deceased to the cemetery she decided to have intercourse with the corpse.

After doing her deeds she took a high dose of Tylenol that made her overdose. The police found her before it was too late together with a letter in the coffin in which the young woman confessed to being a necrophiliac and to have had sex with at least 20 corpses.

In the letter she seemed to feel remorse for her actions, writing:

“Why do I do it? Why? Why? Fear of love, of relationships. No relationship has ever hurt like this … It sucks. I’m a rat morgue. This is my den, perhaps my grave.”

In California, where the fact happened, there are no laws against necrophilia and therefore she was only reported for car theft and for disrupting a funeral. She only spent a few days in jail and got away with a $ 255 fine.

The case, as you can imagine, had a lot of media resonance and, instead of hiding, Karen agreed to do an interview with Jim Morton, where she answered many specific questions about her perversion.

Karen said that when she wrote the letter she was still paying attention to the company:

“Everyone said necrophilia was wrong, so I was doing something wrong. But the more people tried to convince me I was crazy, the more I became surer of my desires.”

Jim said he had read about her trial and noticed that a few people had supported her. Karen said that, in fact, nobody had done so. The only support she got was that of her family, who felt obliged.

In fact one of her brothers did not want to have anything to do with her, saying she “wanted to remember her as she was before.”

Despite him later apologizing, their relationship is not what it used to be. The other brother instead was more sympathetic but could not explain how his sister could have done such a thing.

Karen also said that before the trial she had a boyfriend who discovered her perversion.

After discovering her, he slapped Karen telling her she was not a woman and asking her how she could get around fucking corpses.

Greenlee also told of how men, when they discovered her secret, thought she did it because she had not yet met anyone that could make her feel pleasure and that they were the ones who would be able to change her.

How did she have sex with the corpses?

Karen showed no embarrassment and replied that people often think that in order to reach orgasm penetration is necessary. Instead, as anyone who has had sexual experiences will know, this is not a must. She said that the frontal area is the most sensitive one and it’s enough to stimulate it to feel pleasure. However, she reminded that love is not just sex, but also caressing, hugging or holding hands.

During intercourse the cold, the aura of death, the funeral decorations and the smell of death helped her.

She made it clear that there were certain smells and odors, for example that of a victim remained in the water for several days or that of a charred body that did not particularly excite her, but that of a recently embalmed corpse excited her a lot.

“I was also excited by the blood, which tended to leak from the mouth of the corpse when they are on top of me and I make love to them passionately.”

When did she discover she was a necrophiliac?

It was something to which she was always attracted since childhood.  She recalled that she used to organize funerals for her pets and had a small cemetery in the garden for them. She also said that she lived in a small town and that the annual barbecue of the town fire fighters was held near the funeral home. To use the bathroom you had to go through the building of the funeral home and she was always looking for an excuse to go in.

During the interview she also talked about how she got caught several times by various funeral homes, but no one had ever reported her for fear of bad publicity.

Many have tried to change her, to treat her. For example, after the trial she was forced to see a psychologist, but more and more therapy just revealed that she liked to be what she was: a necrophiliac. Subsequently, however, she has changed names and cities and we completely lost her traces.