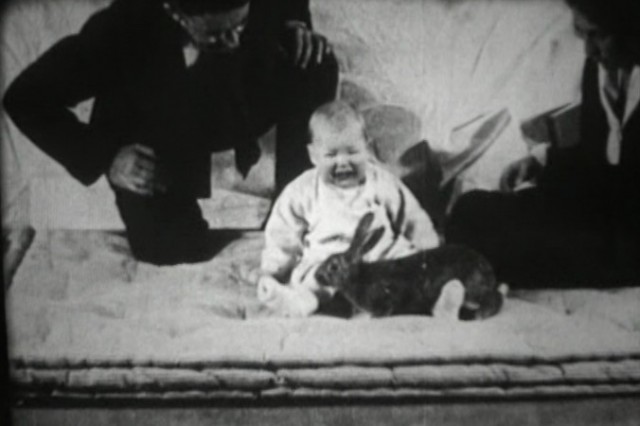 This experiment was conducted in the 20s by American psychologist John B. Watson and his collaborator Rosalie Rayner on a 9-month-old baby, named Albert.

As Watson himself wrote in 1990, the experiment was aimed to answer the following questions:

The experiment, however unethical, showed empirical evidence of conditioned (or Pavlovian) reflex in human beings.
Watson carried out the study on Albert, a healthy baby of 9 months, who was selected in a hospital and subjected to various stimuli, such as the sight of a white mouse, a rabbit, a dog, a monkey, masks with and without hair, cotton, wool and newspapers set on fire. The child was not afraid of any of these elements.

Later he was shown the white mouse, but this time its appearance came with a loud noise provoked behind the child, and created by hitting a piece of iron with a hammer; this happened every time the baby touched the animal.

They repeated this process several times and then showed the mouse to Albert again, this time without any noise. The little one immediately reacted in a nervous way and at the sight of the animal; he would start crying and try to crawl away. The child was associating the noise that had frightened him with the mouse and then a stimulus before neutral was now turned into a negative one.

Albert seemed to associate the noise, and therefore the fear, to other stimuli such as a dog, a rabbit and even a Santa Claus mask with a beard made of cotton balls.

The life of Albert after the experiment

The experiment lasted about three months, but nowadays it would not have much credit because of its deficiencies, primarily as it was conducted on a single subject only.

Shortly after the tests, Albert left the hospital and Watson had no time to revert his fear and later found out this lasted throughout his life.

However we do not know Albert’s identity: some argue that it was the son of a nurse who worked at the hospital, perhaps the son of a midwife or even of a woman who worked in the same building where Watson worked. In any case the mother seems to have been unaware of the experiment.

Several attempts to discover his true identity were made and he was first identified as Douglas Merrett, the son of a hospital nurse, but then it was discovered that it was not him. Someone came to the conclusion that it could be William Barger, who was called Albert” by everyone in his family,and who was born a day after Merrett.

Who he was in charge of the case was able to contact a niece who said she was very attached to her uncle when he was alive, and remembered that he was afraid of dogs, for which he had been the object of playful teasing from family members.

However she does not remember other phobias.

Needless to say this experiment was strongly criticized and considered unethical. Thanks to this experiment and others like it, we have now legislation in place that prevents this type of study.