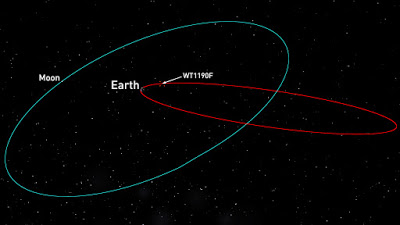 That’s right;NASA has calculated that on the 13th of next month the Earth will be hit by an object that is orbiting around our planet.

This object, called WT1190F or UDA34A3 or UW8551D, was discovered in February 2013 by the Catalina Sky Survey only to be lost again and rediscovered in November of that year.

On the third day of this month it was spotted again and it looks like the piece of a satellite, with low density and hollow inside, but we still do not know exactly what it is, making this unit a real unidentified flying object.

No worries though, the UFO in question is small and probably it will burn almost completely in the atmosphere and it will end up off the coast of Sri Lanka on November 13, at 06:20 UTC, 05:20 Italian time.

This piece of “space junk” is not only one of the few objects we have been able to predict the exact day of impact with the Earth, but also the first “human ufo” to return to our planet.

The UFO that will hit the Earth will give scientists an excellent opportunity to study an object falling from space, and to test the plans studied by astronomers to deal with the fall of a dangerous object onto the Earth. To see if it will work, though, we have to wait 16 days more.