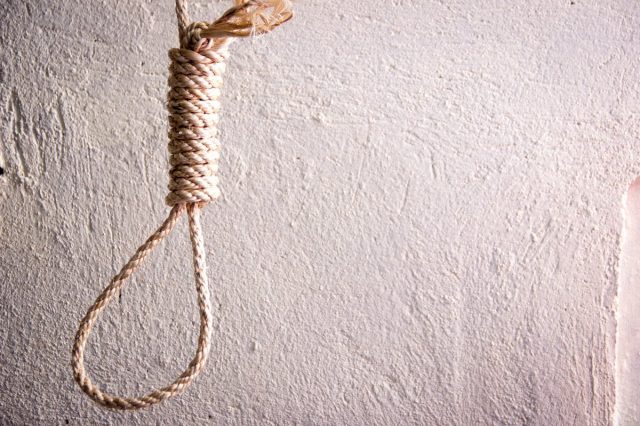 Hanged, drawn and quartered describes a method of execution in force from 1351 to 1870 in England as a punishment for high treason, even though quartering was often practiced post-mortem as early as in the Middle Ages.

The prisoners were led to the gallows where they were stripped and hanged.

The Executioner, however, made sure that the neck would not break and released the prisoner before death.

Initially they were brought to the gallows pulled by horses, but this greatly reduced the life of the victim and therefore it was decided to opt for another solution: the prisoners were tied to wooden carts attached to a horse, which dragged them to the gallows.

After being hanged, the victim was placed on a wooden table, with his hands tied behind his back, and emasculated.

The penis and testicles were cut off neatly, and while the person was still conscious, their belly was cut open and the intestines were extracted, which were then burnt together with the genitals right in front of the convicted.

At this point the prisoner was beheaded and his body was cut first into two and then into four parts. Each of the four parts was then exposed at the four corners of the city, as a deterrent, and the head was instead taken to the Tower of London.

But of course women could not be treated in the same way:

It would have been unseemly to show a naked woman in public! To solve this problem they would burn them alive on a stake.

This method of execution was aimed not only to cause immense pain, but also to denigrate the victim by depriving them of their dignity, by exposing them naked and by cutting off their genitals, but also to take away the status of “person” from them, as they got a worse treatment than that granted to animals that, usually, were killed before being quartered.

This technique of execution and torture was soon exported to the rest of Europe, but was never widely used.

The history of dismemberment however goes back to even before 1300.

In Asia it was already carried out several centuries earlier, using trained elephants. Blades were tied under the feet of the elephant and, when the trainer would give the order, the elephants walked on top of the victim and cut them into pieces.

Even during the Holy Roman Empire this method was used to punish treason crimes, and Charles V, in his Constitutio Criminalis Carolina, described how quartering was to be carried out: the body had to be divided into 4 parts and the four parties would have to be thenhung from stakes in four parts of the city. This is howWilhelm von Grumbach died in 1567, convicted of high treason. He was gutted and brought alive to the scaffold where he was strapped to a table and hi heart was torn out of his body before he was quartered.

An eyewitness says that Von Gumbach cried for several minutes after his heart was snatched from his body.

Although it was usually used for high treason, sometimes this method could be used for other very serious crimes.

This was the case of Bastian Karnhars who, in 1600, was accused of 52 murders, including 8 women, first raped and then killed, and a child of whom he allegedlyate the heart.  Karnhars had first three strips of skin removed from his back using skinning method, then was tortured with burning tongs, his fingers were cut off one by one, his limbs were broken on a wheel and then quartered while still alive.

Another method of quartering is carried out tying the four limbs of the victim to 4 horses that were then routed in different directions. Subsequently an Executioner would cut the body suspended in mid-air in two.

Or the prisoner’s feet were tied to a large rock and the head to another. The body was tied at the top of a wall and the stones were thrown down. In this way the body was sliced sharply.

It has beenused as a form of death penalty in Korea and China, but is now no longer in use in any country.