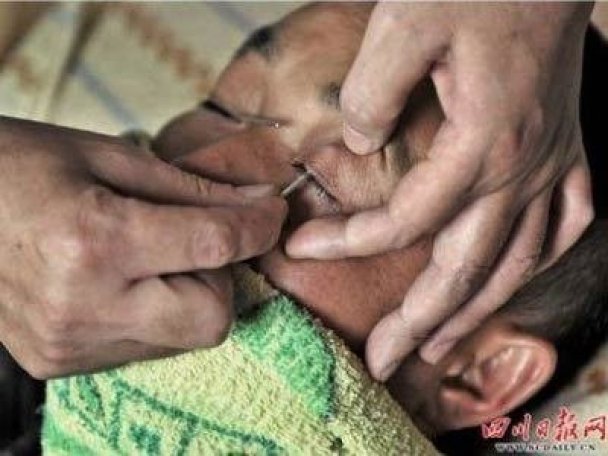 The customs of other countries can sometimes seem strange, funny or disturbing. Disturbing is one custom of some parts of Asia, such as China and Vietnam, where in the past it was common for the barber, as well as making your hair and beard, to scrape your eyeballs.

You read right: a barber inserted a razor or other instrument under the eyelids and scraped the eyes. Literally he scraped them.

Despite being a now abandoned practice (who knows why?), you can still find some barbers who execute it.

Scraping of the Eyes

First of all: why would anyone want to be scraping their eyes?

Because according to a saying of the province of Sichuan, “cleaning” the eyes would help to see the beauty of life.

There is evidence of this custom since ancient times, but unfortunately (unfortunately?) today this practice is slowly fading.

However you can still find the eye scrapers, such as Liu Deyuan practicing this art for about 10 years and has a loyal customer base that return every month for a nice scraping of the eyeball.

How do you scrape an eye?

Usually the barber takes the same razor used to shave, rinses it in the same water used to create the beard for various clients and then proceeds to place it under the eyelids scraping the same eyelid and the white part of the eye.

After scraping the eye with a razor, he inserts a metal rod under the eyelids, and also cleans by moving the bar back and forth.

I do not know what made me more afraid, the razor orbit or that the razor was used to cut the hair and beard, and scrape the eyes of hundreds of customers before me without being disinfected.

If you happen to make a trip to China and want to try something different, get yourself scraping of the eyes from a barber!