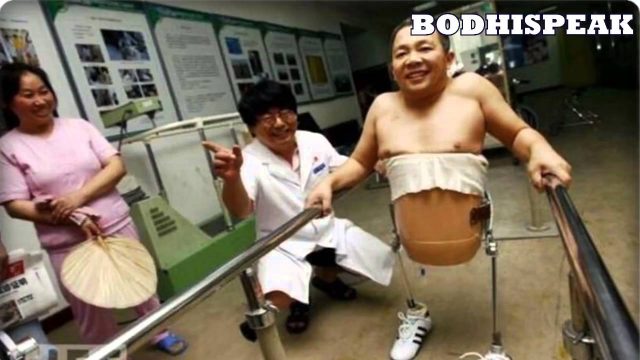 Peng Shuilin is a Chinese man who in 1995 was the victim of an accident that caused him to lose his lower body. He now measures 78 cm.

While he was walking, Shuilin Peng was hit by a truck and was literally sliced in half.

His legs, together with his pelvis, were severed from the body and ended up a few centimeters from the head. The amazing thing is that Peng Shuilin never lost consciousness.

After calling an ambulance many of the present made a video where you can see the poor Peng, absolutely conscious, looking first at his severed legs on his right and then tries to get up to see if indeed those are his legs.

From time to time he touches the belly, completely torn and from which the intestines are protruding.

After the arrival of the ambulance the man was rushed to hospital. His condition appeared immediately critical, but after several hours in the operating theater he miraculously survived. 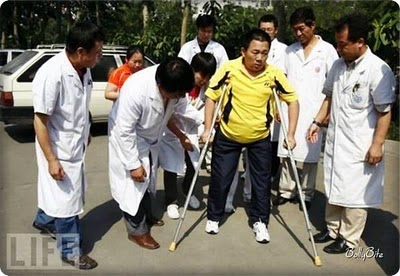 It took a team of 20 doctors to perform the first of many operations that he had to undergo.

The doctors removed skin from Peng’s face of and used it to cover the internal organs that were not yet covered. Then began a long convalescence.

Due to the fact he did not have any abdominal muscles Peng was bedridden in a horizontal position for several years, immobilized, because any effort would yield the skin that kept his internal organs covered.

But finally, slowly, he began to get better and better. As soon as he could move he began to do exercises for the arms and so to be able to perform everyday tasks such as washing his face or teeth.

Once he recovered his strength he was given prosthetics with bionic legs with which he had to learn to walk. After long and hard training he now has been given better prosthetics, and can now walk with the aid of crutches.

Peng has never lost his spirit and, on the contrary, he is always smiling at life and is happy to go on living.