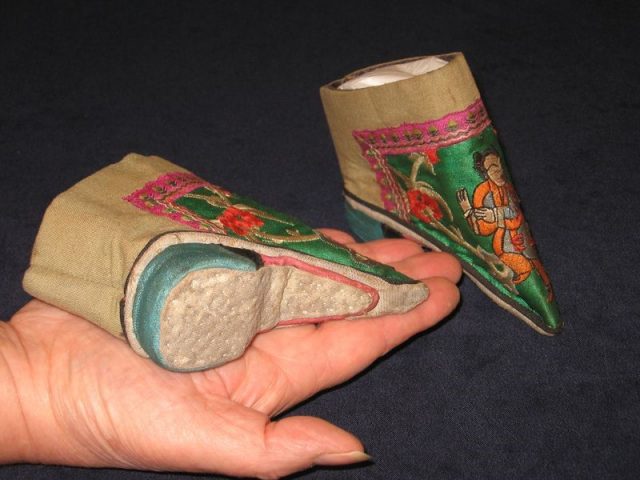 The bound feet are also called “Lotus Feet”. This evocative and poetic name is in reality used to refer to the painful practice of foot binding in vogue in China until a few decades ago.

This practice of binding and deforming women’s feet began with the Song Dynasty, in 960 or so, and it was finally abolished in 1902.

Various stories and legends try to explain this practice, for example it is said that a concubine of the Emperor, in order to win her majesty’s favors, put bandages on her feet to be able to dance in a unique way, or that one of the concubines suffered from clubfoot and convinced the Emperor to bind other women’s feet and make them deformed like hers, so that it would became a standard of beauty.

In fact the practice was probably born with the dancers who used bandage to bind their feet to dance better. The spectators began to bandage their feet in emulation, the practice became widespread and foot binding became a real status symbol.

During the Qing Dynasty the rulers were not Chinese but Manchu and tried to ban this practice, but did not succeed. 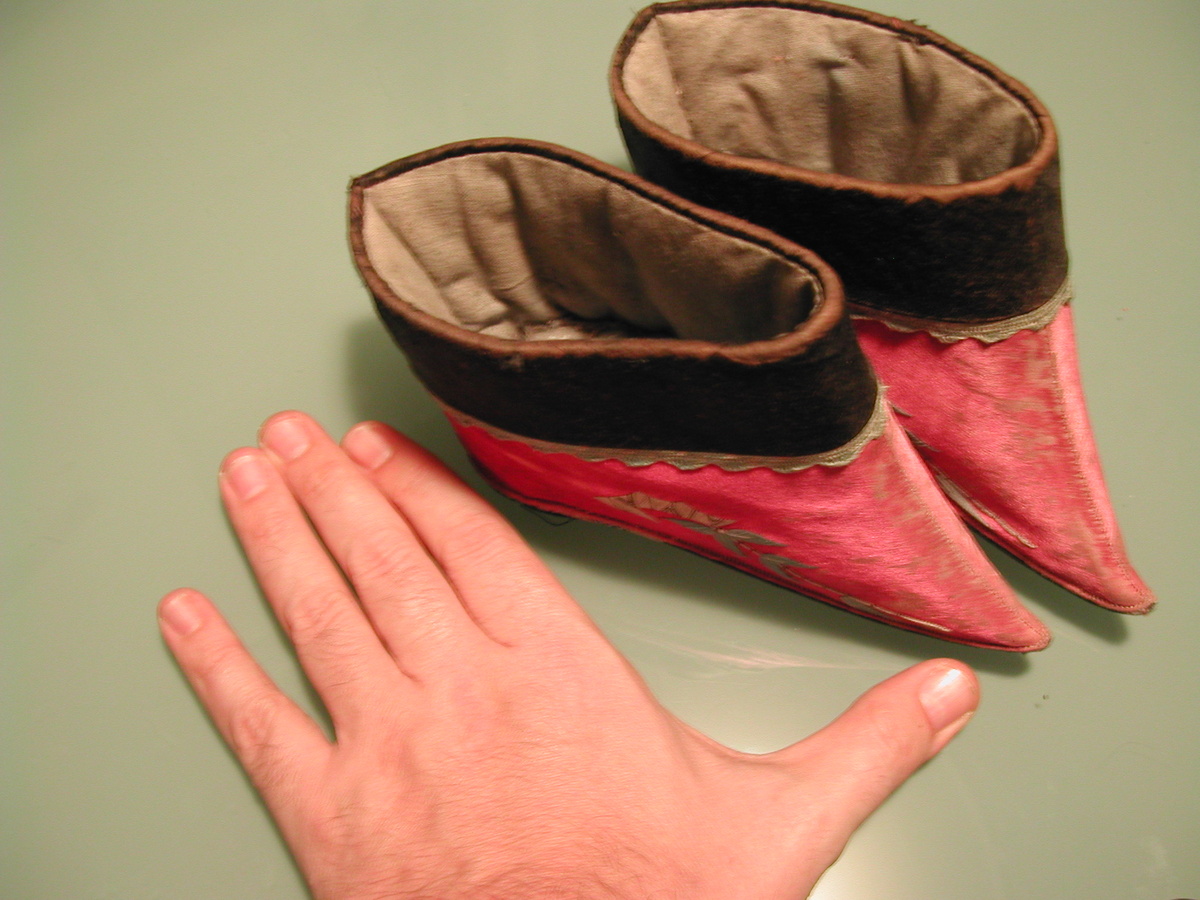 The foot binding occurred at an early age, usually at the age of 5. The mother used a bandage, 5 cm wide and about 3 meters long, and wrappedit on the foot of the daughter, taking care to fold all the toes, except the big toe,under the plant of the foot.

The bandage was very closely done, also to help bring the plant of the foot as close to the heel as possible. Then the girl was told to walk. The pain was excruciating, but it was unthinkable for a woman not to have bound feet;

This feature was in fact necessary in order to get married. No man would have wanted a woman with normal feet.

This practice often led to infections and ulcers that created bad smell and blood leakage, as well as pus. The nails had to be cut often to prevent them from entering the skin, but sometimes this was not enough.

Periodically all the skin and dead flesh had to be removed and the wounds cleaned,after about five years or so the foot was permanently deformed. The position of the toes and the tight bandage meant that the circulation in the foot was almost non-existent, and any cuts or bruises could lead to infection, gangrene and loss of toes.

The latter case, however, was seen as an advantage, because a fingerless foot appeared even smaller, and very often injuries were self-inflicted specifically to lose the toes.

The deformed feet could reach a maximum length of 8 cm and had to be covered in shoes decorated by the girls themselves. Even the decorations of the shoes were important for marriage, as they were the symbol of the domestic ability of young brides.

Foot bindingstarted to become a symbol of wealth, as a woman with bound feet walked with difficulty and therefore could not work. Westerners saw this practice as a symbol of women subjugation:the deformed feet not only meant that a woman could not work, but she couldn’t even leave her home becoming therefore totally dependent on her husband.

However, let’s remember that the woman had total control on the house and the children, and they had an important role in the family.

This practice had also been strongly desired by women, who defended it and continued to practice it for about 50 years after its official abolition as having bound feet gave them the chance to marry a wealthy man and therefore re-establish the fortunes of entire families.

Peasant families usually practiced this tradition on their daughters later than the rich families, because the girls had to work as much as possible before the wedding, but it was not unusual that the eldest daughter had her feet bound and her younger sisters would then become her servants after she got married. 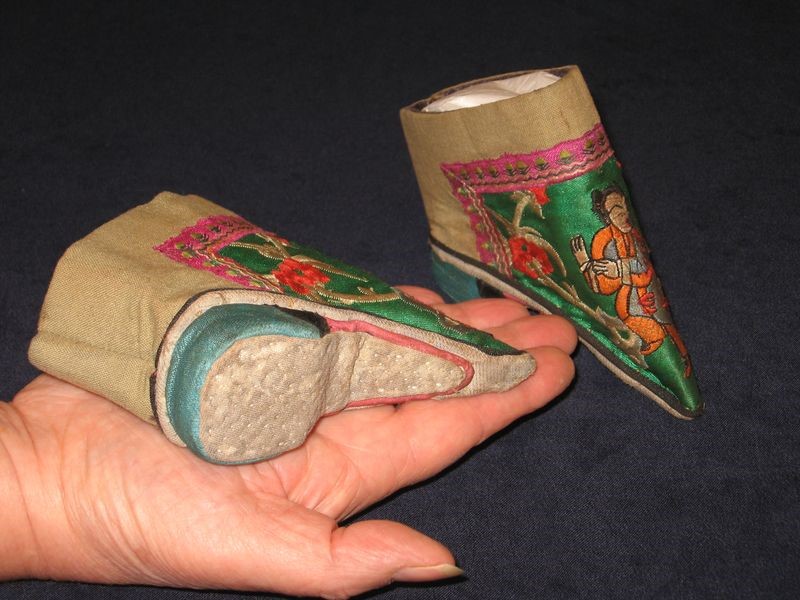 (A bit like the movement caused by high heels) and some men claimed that this walk strengthened the adductor muscles and thus would make the vagina tighter.
However, they had to always stay well bandaged and covered, because their view without bandages could provoke disgust, not to mention the awful smell of rotten and putrid flesh that they inevitably gave off.

Only the husband could touch the feet of a woman or take off her shoe, otherwise the woman suffered a humiliation that could also lead her to suicide.

This custom has been strongly criticized, especially by Westerners who thought of it as barbaric and cruel.

However sometimes it is compared to the use of the corset, very much in vogue in the West, which deformed the chest often with fatal results.

The shoes used by women who had undergone the golden lotus are on display in various museums and they are usually just 8 cm in length or less, so it is really hard to imagine that they can fit the foot of an adult woman. As it was a practice hard to be eliminated, there are some recent photos of women with bound feet.