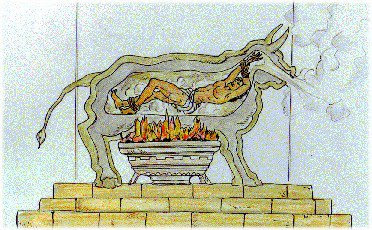 The torture of the brazen bull was invented by Perillos of Athens, and presented to Phalaris, the Tyrant of Akragas, as a new method of execution.

How did the brazen bull function?

The instrument was a bronze statue depicting a bull, with natural dimensions. The inside, however, was hollow and on one side was a door through which a condemned man entered.  He was forced into a laying position and, given the size of the statue, did not have much space to move. Once in position, the door was closed, and a fire was started just under the belly of the bronze bull.  It was fanned until the belly was glowing.

In this way the victim inside was slowly roasted to death in the most atrocious, painful way.

Even if death occurred from the Inhalation of the fumes released during the first few minutes, the condemned man suffered from severe burns, and emitted harrowing screams.

But the Bull had not only been designed as an instrument of torture, but also as an item of enjoyment for the tyrant, so the screams would not have been very pleasurable.

Perillos, therefore, had thought well in advance to provide the head of the bull with a system of internal tubes that transformed the cries of the poor wretches inside into sounds of a bellowing bull.

Furthermore, spices and perfumed oils were placed inside the bull to mask the smell of burning human flesh.It is said that the victims’carbonized bones seemed to shine as jewels, and bracelets were made with them.

The death of the inventor of the brazen bull 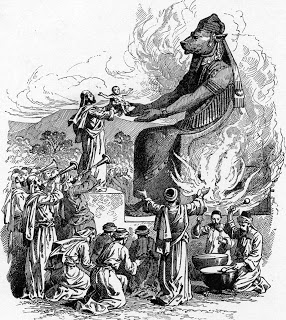 The Tyrant of Akragas was very pleased with this new method of execution, and wanted to test it immediately. He wanted to hear if the screams really would be similar to a bull’s bellows, and

ordered the very same Perillos to enter his creation for testing. The bronze founder entered, confident of his invention.  But as soon as he’d settled inside, Phalaris ordered the door closed, and set the fire under the bull.

Perillo yelled desperately, and Falaride appeared pleased that his screaming sounded like bellowing.

Perillos was allowed to exit before he died, but it is then said that Phalaris had him thrown from a cliff.

This method of torture was used not only in Ancient Greece, but also by the Romans as a method of execution for Jews and Christians.

It is believed that the inspiration for this bronze bull could be found in a Carthaginian statue of the god Moloch.  It was represented with the head of a calf, in which children were sacrificed by putting them into the hands of the statue,from where they slid into a furnace in the underlying bronze.