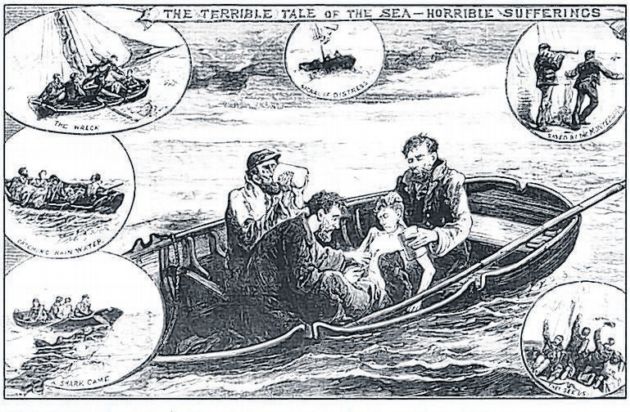 The Mignonette was a yacht that was shipwrecked in 1884, forcing its crew to resort to cannibalism in order to survive, being remembered as “the cannibals of the Mignonette”.

The History of the Cannibals of the Mignonette

Australian John Henry Want decided to buy the Mignonette during a visit to England. In order to get the ship to Australia, he was in need of a crew, but struggled to find one, given that the small size of the yacht made it difficult for such a long voyage.

On 19 May 1884,the Mignonette sailed for Sydney. But in June the weather began to worsen, and in July a terrible storm forced the small crew to abandon ship on their single dinghy.

Unfortunately, they’d had to abandon the ship in a hurry, and, apart from a few turnips, failed to bring food nor fishing equipment with them.

One day they managed to capture a turtle.  They drank its blood and ate its flesh.

Other days passed and it was decided to eat the turnips, but they were quickly gone. As time passed, the possibility of survival lessened, and the crew knew it well.

The captain, therefore, suggested the idea that in order for the others to survive, one of them would have had to be sacrificed.

One day Richard Parker, the youngest of the group, fell ill and the captain again proposed killing someone to eat. One of the members objected, saying that with the help of God they would spot a sail the next day.

But, unfortunately, they spotted nothing and the 19th day the only way to survive seemed to be to sacrifice a crew member. The captain asked everybody if they had family.  All were married and had children, except for poor Richard, then only seventeen years old.

As he was very ill and without strength, it was decided that he would be the victim.

The Act of Cannibalism and the Process

The captain approached Richard, prayed, and told him that his hour had come.

After killing him, the other three members of the crew drank his blood to quench their thirst. Then the captain extracted the heart and liver, and divided them each into three parts.

Four days later a ship was sighted, and they were taken on board, also bringing the remains of poor Richard.

The three survivors were put on trial and were sentenced to death. The penalty was commuted to six months in jail as public opinion strongly sided with them.

There is, however, an oddity in this affair.  The writer Edgar Allan Poe wrote a novel “The History of Arthur Gordon Pym” where an expedition to the Antarctic is shipwrecked, and only four members are saved after climbing onto a raft.  In order to survive, they decide to randomly pull the name of one so the others can survive. The name Richard Parker, ships boy, was pulled.

What is strange? The novel was written 46 years before the Mignonette incident.