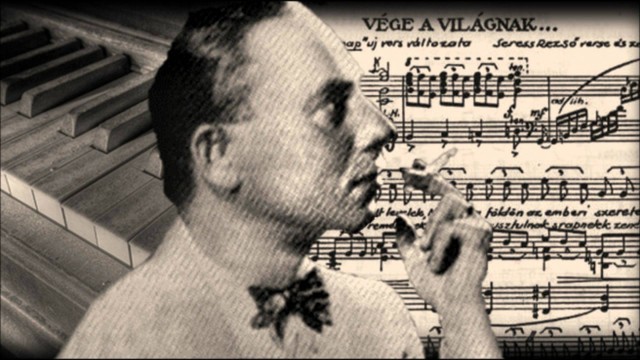 The song “Gloomy Sunday” is also known as the Hungarian suicide song because of a legend related to it.

The story of Gloomy Sunday

Gloomy Sunday was written in 1932 by the Hungarian composer Rezso Seress with the title “Vege to világnak” (The world is ending) and was about the despair caused by the war.

The last stanza was indeed a prayer for the sins of the people. Rezso struggled to find publishers because of the melancholy of his music. One of the potential publishers declared:

It’s not that the song is sad, it is that it contains a kind of desperation. I do not think that would do anyone any good to hear it

The poet László Jávor wrote an alternative text entitled “Szomorú vasárnap” (Gloomy Sunday), which was recorded in 1935. This text was about a young man who committed suicide after the death of his beloved one.

This latest version became very popular, while the first and original one was soon forgotten.

In 1936 it was first recorded in English by Hal Kemp with the text of Sam M. Lewis,and it was also recorded the same year by Paul Robeson with a text written by Desmond Carter.

He remained fairly known in English-speaking countries until the version sung by Billie Holiday, in 1941, in which the singer added a verse that clarified that it was a dream and her beloved was at her side.

The version of Lewis was a clear reference to suicide and even the label on the record bore the inscription “Hungarian suicide song”.

Over the years there have been a number of urban legends about this song, according to which many people would have committed suicide after listening to the melody.

The media in the 30s would associate this song to at least 19 deaths, but proving the veracity of these claims is virtually impossible.

Urban legends would be a speculation on the stories of suicides that instead, most likely, would have been due to severe poverty and famine in Hungary at that time.

It ‘is true though that in 1968, 35 years after its composition, Rezso committed suicide.

The BBC also forbade the Billie Holiday’s version because they thought it was too sad for war times. The ban lasted until 2002.

Herebelow I leave you the video of the original song

And the version by Billie Holiday