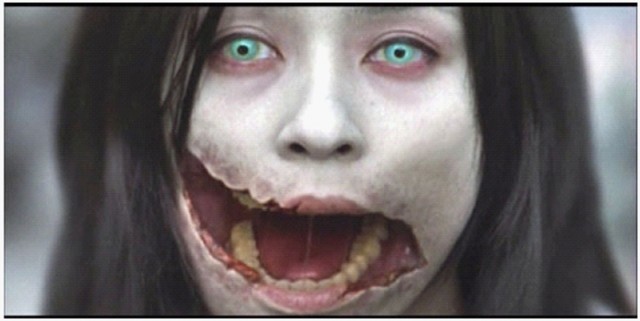 Kuchisake-onna is a Japanese legend that tells of a woman who lived hundreds of years ago, perhaps in the Heian period (from the eighth to the twelfth century).

This woman was the wife of a samurai and was said to be beautiful and very vain.

The young lady, though, was unfaithful to her husband who one day discovered her and, in a fit of anger, hit her with his katana cutting her face from ear to ear, opening her mouth fully.

The man then is claimed to have shouted: “Who will tell you that you’re beautiful now?”

The urban legend of kuchisake-onna

Over the years, in Japan, the word began to spread that a woman with a surgical mask, very commonly used in Japan as a way of protection from pollution and diseases, would stop passers-by asking them: “Am I beautiful?”

People usually answered yes, the woman would then take off her mask, revealing her disfigured face and devouring the victim with her huge mouth.

Other versions say that after having removed the mask, the woman would chase the victim in order kill them on their doorstep. The only way to save themselves seemed to try and confuse her with their answers to gain time to escape. It is also said that throwing fruit or candy at her would distract the spirit, as she would stop to pick them up and eat them.

In 1979, always in Japan another version of the kuchisake-onna spread. Many reports were made about a woman with her mouth covered with a mask who would stop students asking them: “Am I beautiful?”

If people answered yes she would take off the mask, holding out the question again. If the victim said no they would be killed with a pair of scissors, and if they said yes they would be disfigured. Here too, the best strategy seemed to be to respond in a confused way and then run away.

These voices shook the Japanese so much that younger students were escorted home, in groups, by a teacher.

In the 2000s the urban legend spread to other parts of Asia such as South Korea.

The latest version may have originated from an incident really occurred in 1970 in Japan, when a woman who was chasing children was hit by a car and her face was disfigured by a cut on her face.