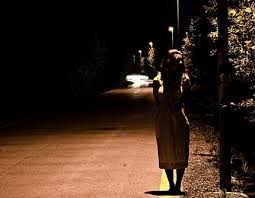 This urban legend has spread to many countries for many years, decades actually. I decided to start this new category with this urban legend because this is the one that, every time I read it, still gives me goose bumps. Since there are many different versions of this urban legend, I’ve decided to write it as a story using various details of the tales I’ve read. Enjoy the reading!

Marco was returning home after an uninspiring evening: usual pub, usual friends, but maybe he was just too tired to have fun and then he decided to greet everyone and leave. He emptied what was left of his beer in one gulp and walked toward his car. It had started to rain but he did not seem to worry about it and walked slowly under the rain to reach his banger.

“I have to decide to buy a new one – he thought – or one of these days I will be left stranded in the middle of nowhere, I’m sure!” Marco worked a lot, so he was always tired and could not quite get to enjoy those little moments of happiness that he could grant himself; even so, the money never seemed to be enough.

After he got behind the wheel he continued to mumble about his life and then began to fantasize about how he might turn it around. Outside it was pitch dark, and the patter of rain on the windows, along with the swish of the windshield wipers, was almost hypnotic.

He felt his eyelids growing heavy and was about to fall asleep when the headlights lit up something in the middle of the road and he almost had a heart attack: it was a girl, wet from head to toe, who was there hitchhiking. 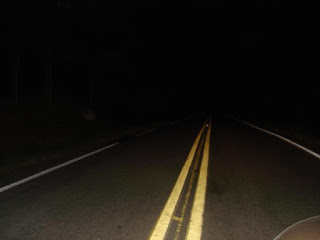 He stopped the car suddenly and gestured for her to get into the car.

– “What are you doing at this hour, alone, hitchhiking? With this rain especially!”

– “I was at a party, but I decided to leave early and no one wanted to take me back. I thought I would walk, my house is not far, but then it started to rain”

– “You should be more careful, I almost run over you! Tell me where you live and I will take you home”

The girl gave him the necessary directions and Marco resumed his route. He decided to start a little conversation and asked her if she was from the area; they seemed to be the same age but he did not recall having ever seen her in any of the venues where the youth of the area used to hang out.

– “Yes, I am from around here –she answered in dry-tone but I’ve been gone for a long while.” Then she turned to look out the window, sending out a clear message to Marco: she had no desire to make conversation.

Fortunately the house was nearby and within minutes they arrived. Marco was relieved, that girl had something that disturbed him.

– “Thanks for the ride,” she murmured.

– “I’m Laura. Thanks for the ride, and goodnight”. Having said that she turned and began to walk home.

“What a peculiar girl,” thought Marco, he started driving again. He was almost glad that Laura had got out; there was something that did not convince him about her.

Back home he went to bed and fell into a deep sleep. The next morning, being his day off, he got up late, ate a bite and, noting that the fridge was half empty; he decided to go to the grocery store.

Just as he got into the car he noticed something under the passenger’s seat: it was a handbag.

“Damn! – He exclaimed – Laura must have forgotten hers last night.” In spite of the fact he didn’t really feel like it, he decided to return it to the owner and went to the house of Laura.

It was a small but nice house, with a small garden at the front. He rang the bell and waited. Seconds later a middle-aged lady came to open the door.

– “Good morning ma’am, I’m the guy who accompanied Laura home last night. She forgot her purse in my car, here it is”

The lady, without even looking at the bag, stared at him with an air first sad and then angry and said sharply: “Do you think you’re funny? Get out of here before I call someone” and slammed the door in his face.

Marco was very surprised by this behavior and, not knowing what to do, he rang the bell again. This time the one who opened the door was a man, probably the lady ‘s husband.

– “Look, I do not know what you are talking about! I am here only to return the bag to Laura, I came here on purpose, and you treat me like that? Here, take it, nothing is missing, you can check!”

That said, he abruptly gave the purse to the man. At this point he heard the voice of the woman who had opened the door just telling her husband, “Laura had one exactly like this one.”

The man then began to rummage in her purse and, after finding Laura’s documents, he burst into tears.

The boy at this point did not understand anything anymore. What the hell was happening? What kind of crazy family had he come across? He was about to leave when the man grabbed him by the arm and asked him, crying: “Where did you find this purse? Who gave it to you? Answer me!”

Marco repeated again what had happened the previous night, describing in detail the facts and the girl. At this point the woman exclaimed: “That’s impossible! Our Laura died fifteen years ago!”

Marco later discovered that Laura was a girl of just 23, who had died fifteen years prior. She was returning home from a party and she was hitchhiking when she was hit by a car: the driver had swerved, probably because of a sleep attack.