Today is Friday 13th and, both in Italy and in Anglo-Saxon countries, it is considered an unlucky date. To this day even movies have been devoted, such as “Friday the 13th”, starring one of the villains par excellence: Jason.

But why is it considered an unlucky day? And why in Italy Friday 17th is also feared?

Let’s start from the origin of Friday as fateful day. One theory is that Friday is connected to bad luck because that’s when Jesus was crucified.

Another one traces this superstition to the “Canterbury Tales”, a collection of 24 short stories dating back to the fourteenth century, this which the weekday is considered the bearer of doom.

As for the number 13, it has always been considered an unfortunate number bearer of disasters due to episodes that had this number as a main character.

For example, the Last Supper, where we find Jesus and the 12 apostles before Jesus’s death (hence the custom of never sitting 13 people at the table);

or the Nordic myth according to which Odin was eating with 11 friends when suddenly Loki, the god of evil, entered.

But even in the code of Hammurabi, dating from around 1772 BC, the number 13 is omitted from the list of laws.

The fact is that 12, since unmemorable time, has always been considered a perfect number and consequently the 13 considered to be of little value.

Some buildings even omit the floor 13, some airports do not have the gate 13 and there are the places avoiding such number or some roads won’t have the street number 13. 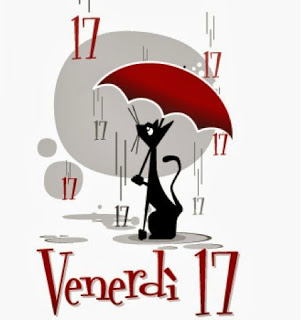 As for the number 17,however, the story is another. Already in ancient Greece, it was considered inauspicious for the sole fact of being the one between 16 and 18 representing, respectively, the perfection of the quadrilaterals 4×4 and 3×6;

in the Bible it is written that the Great Flood began on the 17th day; finally, on the tombs in ancient Rome it was custom to engrave the word VIXI, meaning “I lived” and therefore I am dead now. If put into an anagram it results into XVII, the number seventeen in Roman numbers.

In the Neapolitan Smorfia this number represents the “disgrace”.

Perhaps for all these reasons Friday 17th is an all-Italian superstition.

There are even phobias relating to these two days. There are those who ate terrified by Friday 13th and suffer from triskaidekaphobia while those who just cannot stand Friday 17 suffers from eptacaideaphobia.

Curiously, the perception of these days and these numbers change in different cultures. In the Jewish Kabbalah for example 13 is considered a lucky number.

In China, Korea and Japan on the other hand the unlucky one is the number 4 (and all numbers that contain it) because his pronunciation, in all three languages is similar to the word “death”.

Now that you know their origins, perhaps, these days will make you a little less fearful. I still wish you a happy Friday the 13th!