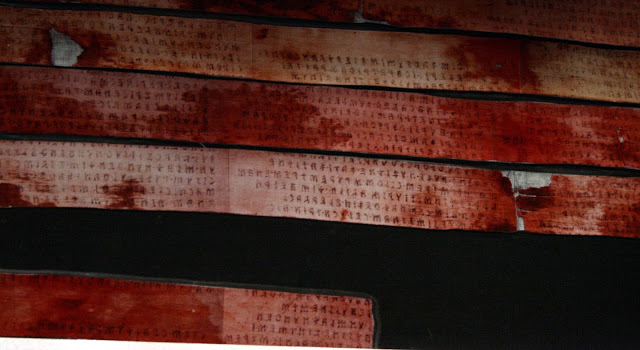 Liber Linteus Zagrabiensis (Zagreb linen book) is the longest Etruscan text ever found and is the only one to be written on linen. It dates back to the third century BC and, because of the lack of knowledge on the Etruscan language, it remains to this day almost completely un-translated.

In 1848 a Croatian official, Mihajlo Barić, quit his job and decided to travel the world. One of his stops was Egypt, and while he was in Alexandria he bought a sarcophagus containing the mummy of a woman as a souvenir.

Barić once at home, in Vienna, put the coffin in the living room in an upright position at an angle that would be suitable to show it to guests.

The mummy was wrapped in a bandage of linen that the officer decided to take off and to show in a glass case separately. However he did not notice the inscriptions on the fabric, and it was left on display until 1859 when, after the death of Barić, it was inherited by his brother Ilija.

Ilija had no interest in the mummy and decided to give it to the National Museum of Slavonia and Dalmatia, today the Archaeological Museum in Zagreb. Next to the mummy there was a plaque that read:

“Mummy of a young woman (with bandages removed) in a glass case and held vertically by an iron bar. In another display case are the bandages in which the mummy was wrapped, bearing inscriptions in an unknown language and representing a remarkable treasure of the National Museum. “

In 1859, the mummy and bandages were also studied by the German Egyptologist Brugsch who noted the strange inscriptions. However he thought they were hieroglyphics and did not pursue his research any further.

In 1877, however Brugsch was talking about runes with the explorer and linguist Richard Burton and this made him think about the bandages he had examined 18 years before: what he had seen were not hieroglyphic inscriptions.

He realized that the text could be very important and in the end concluded, wrongly, that it was the Egyptian Book of the Dead, translated into Arabic.

It was thought that the mummy could be that of an Etruscan woman who had ran away from her land for some reason and ended up in Egypt, where she had died and was buried with bandages bearing inscriptions in her own language.

It turned out later that the text was a religious calendar and the mummy was in fact an Egyptian woman. A papyrus found in the tomb identified her as Nesi-Hensu, the wife ofPaher-Hensu, a tailor of Thebes.

Analyzing the text, due to its mention of some deities, it was concluded that the text was written in a small area near Lake Trasimeno, cradle of the Etruscan civilization.

The painting is dated around 250 BC and consists of 12 columns, each of which represented a kind of page. Unfortunately almost all of the first three columns are missing and it is not known how the “book” starts. Towards the end instead the text appears almost complete.

There are 230 lines of text in total, with 1,200 readable words written with black and red ink. The bandage, instead of being rolled up as a scroll, was folded so that the “pages” were one on top of the other.

Despite the Etruscan language still being a great mystery, it has been possible to understand the main theme of the inscriptions that are thought to be a liturgical calendar. Is this all the mystery, or is the mummy hiding other secrets?