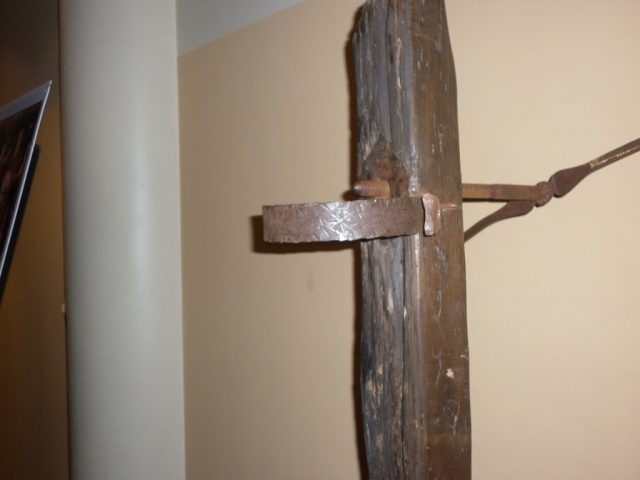 The garrota was a machine used to inflict the death penalty, used mainly in Spain. It basically consisted in tightening a ring made of steel around the neck of the condemned person, in order to break the neck vertebrae. But usually the oncoming death happened by strangulation.

This method was used to convict people belonging to lower classes, as the nobles were reserved the beheading by sword as way of punishment.

Initially this death penalty was executed by strangling the condemned, but over the years the technique was refined. The victim would sit on a chair that presented a higher back seat, consisting of only one axis of wood on which a metal ring was fixed.

The ring was placed around the neck of the condemned and closed in the back with a screw.

By turning the screw, the ring would clutch the prisoner’s neck and, if the offender was lucky, it would break his or her vertebrae and lead to immediate death, that otherwise occurred by strangulation.

In a second moment,a metal tip on the inside of the rim was added, the part of the back, thanks to the pressure that was going to penetrate the neck vertebrae by breaking them and causing death.

The garrota had been used since the days of the Roman Empire and was widely applied during the Middle Ages, especially in Spain and Portugal.

It was also used by the conquistadors in America and the last Inca emperor Atahualpa was sentenced to die by the use of a garrota, in 1533.

The use of this machine became widespread in the nineteenth century because easily made by any blacksmith. It was also considered a more lenient punishment than hanging. Spain’s king Fernando VII abolished hanging with a decree in 1832 and replaced it with the garrota.

However, even in this death penalty distinctions were made between the nobles and ordinary citizens: while the former were brought to the gallows on a horse’s back, the latter were brought on a donkey.

The last sentence by garrota was carried out in 1974, while the same condemnation in 1977 was pardoned.

This death penalty was also used in the Philippines since the Spanish colony and remained in force in the country even after passing under US domination, although the United States never used it.In 2009, Spain finally abolished every kind of death penalty.