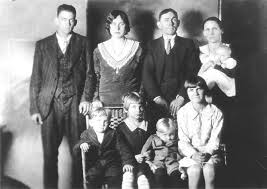 On Christmas Day of 1929 Charles Lawson killed his wife and six of his seven children with a shotgun. The causes remain unknown.

Charlie was born in 1886 in a community known as Lawsonville. He grew up in that community and in 1911 he married Fannie Manring, who gave him eight children. Unfortunately, one of them died when he was just six due to an illness.

In 1918 Charles’ brothers moved to Germanton to grow tobacco and the man decided to follow along with all his family. There he worked on a farm as a sharecropper until he was able to buy a farm of his own.

The massacre of the Lawson family 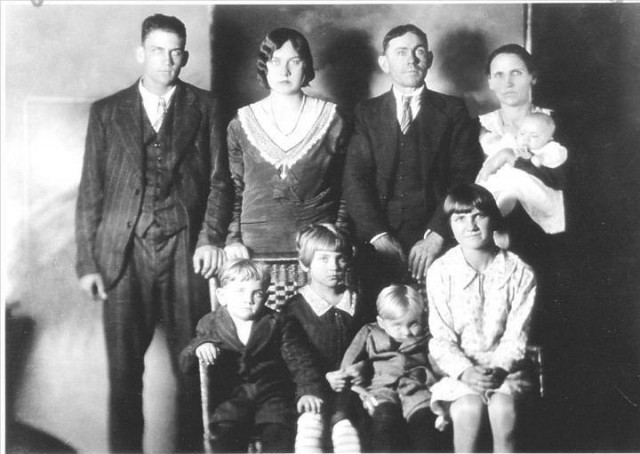 On Christmas Day 1929, Charlie took his family to town to buy new clothes and take a picture of the family.

Although this may seem perfectly normal today, in 1929 it was very unusual as only very wealthy people could afford it.

On the same day Charles massacred his entire family.

He started with the two daughters Carrie and May bell, 12 and 7 years old, who were in their uncles’ house. Their father waited near the tobacco warehouse and killed them by gunfire.

Then he got closer his daughters and struck them repeatedly to make sure they were dead. Later he came home and killed his wife Fannie who was on the porch. His daughter Marie heard the shot and shouted, her father came into the house and killed her too.

Even James and Raymond, 4 and 2 years old, were in the house and when they saw their father killing Marie, they tried to run away to hide. Charles, however, found them and shot them too. Lastly he killed Mary Lou, only 4 months old.

After the massacre he went into the woods near the house where he shot himself. 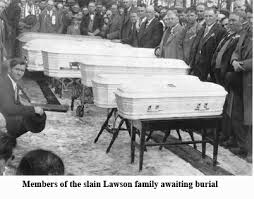 When the police found his body, they also found a piece of paper that said:

“Do not blame anyone but myself”

On the trampled grass they also noted that he had not killed himself immediately, but he had walked around a tree for a long time before deciding to commit suicide.

The only one to escape the rampage was his son Arthur, aged 16, who shortly before the event had decided to go to visit some relatives.

The bodies were found by neighbours who had come after hearing the gunshots. All the victims had their eyes closed, arms crossed over their chest and their heads resting on some rocks.

For their funeral,the new clothes they had bought that morning were used.

The house was then open to the public as an attraction, and also after it was closed down, it continued to attract many curious visitors until its demolition, which took place a few years ago. 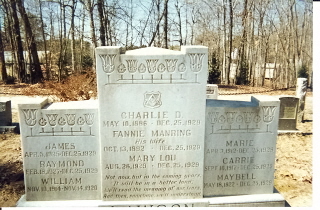 A few months before the massacre Charles had suffered a head injury while working on the farm. Many saw this accident as an event that changed his personality, believing that this could also be the cause of his murderous rampage.

It is not the first time that head injuries are followed by behavioral changes, such as the case of Nannie Doss, and Raymond Martinez Fernandez.

Another cause could be the beginning of the Great Depression that had hit the United States only two weeks prior and had already caused many suicides.

Finally, one of the most reliable theories is that of incest.

It would appear in fact that Charles had a sexual relationship with his daughter Marie. A close relative of the victims is said to have heard her mother talking about this strange situation.

Apparently even Fannie, Charles ‘wife, was aware of this but did nothing to change it.

Also, Marie’s best friend said that a few days before, her friend had confided her that she was pregnant and that the father was Charles.

Perhaps it was to avoid the shame and humiliation in front of his family that he decided to take that extreme action.

The tombs of the Lawson family are in the Germanton cemetery, North Carolina