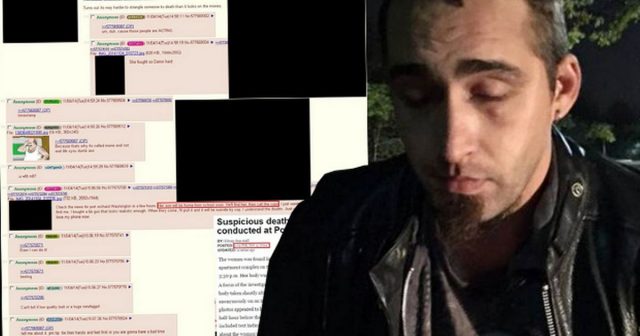 The stories we are going to tell share the same origin, the same substratum. What is 4chan? Let’s start from this simple question. Apparently simple. Launched on October 1, 2003 and designed by Christopher Poole, 4chan is a so-called imageboard website. Images and discussions, a forum of “everything”, summarizing. A global square, without limits or boundaries, where users, in complete anonymity, publish photos and discuss all kinds of topics. Japanese Culture (Anime, Manga, Cosplay, etc.) – the site is inspired by the Japanese portal Futaba Channel (2chan.net) -, Video Games, Interests (Comics & Cartoons, Technology, Television & Film, Weapons, Auto, Sport, etc.), Creative (Oekaki, Papercraft & Origami, Photography, Food & Cooking, Literature, Music, etc.), Other (Business & Financial, Travel, Paranormal, etc.), “Adult” are the categories – each including additional subcategories – available on this bizarre site, where freedom of expression and anonymity are the key principles.

The section, however, that most fascinates and to which 4chan owes its fame is the so-called “Random”. As soon as you click on the link, a window opens: these are the conditions of use of the section:

Cicada 3301: yes, it is in /b/ that the myth of this intriguing enigma was born, still worthy of attention today.

Hardcore photos, however, only represent the tip of the iceberg of this intricate and murky microcosm. That borderline that, inevitably and understandably, fascinates the most daring Internet users.

Crimes, scenes of murders, photos of corpses, a guilty killer confessed ascertained and brought to justice, a possible but never ascertained serial murderer. It is in the undergrowth of /b/ that the news stories that we are going to tell develop.

David Kalac and the crime of Amber Lynn Coplin

It’s November 4, 2014. In the /b/ section of 4chan this post appears: “Turns out its way harder to strangle someone to death than it looks on the movies”. The post is accompanied by a macabre photo of a woman lying on a bed: signs on her neck that are compatible with strangulation, pale, cadaveric colour, the body stripped of its clothes, the head reclined backwards, the mouth open. Users, at first, think of a joke, a hoax, a mythomaniac looking for attention. After all, the web and 4chan are swarming with trolls. Nothing to worry about, it seems. This first post, however, is followed by another one.

“She fought so damn hard,” it says. And that’s not all. A third post follows, in fact, accompanied by a further photo of the woman. I quote:

Look at the news in a few hours in Port Orchard, Washington. Her son will be home from school shortly. He will find her and then call the police. I wanted to share the photos before they found me. I bought a toy gun that looks pretty real. When they come to get me, I’ll pull it out and then they’ll kill me. I understand your doubts, I just ask you to watch the fucking news. Now I have to throw away my phone

The author of the macabre posts is 33-year-old David Kalac, resident in Port Orchard, a small town in Washington State, USA. After committing the crime, Kalac enters a bar, where he stays for several hours. He drank a few cans of Pabst Blue Ribbon, vodka and Red Bull. He left the bar and turned himself in to the police. “I killed Amber Coplin. I strangled her with my hands, then with a shoelace,” David Kalac confesses. The victim is Amber Lynn Coplin, 30, Kalac’s girlfriend and mother of a 13-year-old boy. The same boy mentioned in the post. At the victim’s house, a message written by Kalac: “She killed me first”. The motive appears evanescent: he’s drunk, a discussion, the murder. A rotten domestic violence case.

“The only thing I can say is, I am sorry and I will never forgive myself“, Kalac will say after the sentence.

4chan, however, was the backdrop to a dark story with even more macabre outlines. An episode not yet in focus, still unresolved and, for these very reasons, rather disturbing.

I killed several women for pleasure. If you guess the name of one of the victims, I will post her photographs. Do not write more than ten names per post otherwise you will be ignored. Some of the pictures are Polaroid while others were taken with a disposable camera. I also have photographs from when they were still alive. If you guess all the names I’ll show you where I dumped a body in 1999. The first woman and her photograph are “free”, because her name is hard to guess

The script repeats itself. Similar to what happened in the David Kalac affair, 4chan’s users split up. Some are in the game, others, on the contrary, label the riddle as the usual, umpteenth joke. But to accompany the post, there are two photos. A first image portrays what in all respects seems to be the corpse of a woman: the body lying on a bed, the head slightly reclined to the left, the face, arms and hands dirty with blood, as well as the shirt. The left arm is bent and the hand is turned towards the mouth. Next to this photo, there is a snapshot of a girl alive: smiling, black hair, the dress and hat worn on the occasion of her graduation. Below the two photos, a white sheet of paper and the inscription on it imprinted in pencil: “/b/ August 21, 05”.

A few minutes pass and the author of the macabre post relaunches: “Wow, a great start, incredible. I corrected the date, my mistake”. The anonymous publishes a new photo. The image shows what seems to be the corpse of the woman, this time completely stripped of her clothes: it shows evident signs of violence and fury on her genitals. Lividity and blood on the whole body. Even the sheets of the bed on which she is lying present showy patches of blood. The image, true or false, is horrifying. The date has been changed with a pen: “/b/ August 21, 15“.

The suspicious comments and interested questions of the users follow one another and overlap. A few minutes elapse and here’s a new photograph. Just as gruesome. The anonymous writes: “This is from before I played with her“. The photo shows the body of a woman unnaturally bent inside a cardboard box, in which pants and men’s clothes are arranged in bulk. Only the buttocks of the woman can be seen and her legs – livid – bent in a completely forced way inside the box. A minute after the publication of this photo, the anonymous writes: “I developed them“. A second photo follows: to the two photos of the woman who died and was thrown into the box is added a snapshot of another girl alive, smiling, sitting on a bed, her left leg bent and raised. The same girl as in the previous post? The faces, on a first superficial examination, resemble each other. The black hair, however, is shorter than in the previous photo. Are they, as many people assume, two different victims?

That’s not all: superimposed on the already published photo of the woman forced into the box, you can partially see a face, presumably female, in an apparent state of decomposition. The eyes, the nose, the skin now compromised.

Users are divided: those who say they want to call the FBI, those who continue to consider the anonymous a troll, those who go along with it. After the publication of the photo of the woman forced into the cardboard box, the alleged serial killer disappears. Therefore, a virtual manhunt begins. Users advance the most disparate hypotheses. It is assumed that this unknown has come into possession of photos of crime scenes taken from the police. A son of an investigator, thinks someone. But these hypotheses seem unlikely: the photos are devoid of signs, the brightness and resolution of the same is not optimal, to testify to the amateur and intimate workmanship of the photographs in question.

At this point, the Internet users join forces. In this way, it is possible to give a precise identity to the first girl portrayed in the photo, the protagonist of the “graduation photo”. Her name is Shauna Maynard, 17, who died on 31 December 1997 from Norco, California. On April 21, 1998, her body was found between Blue Diamond Road and Decatur Blvd, Las Vegas, Nevada. On April 24, 1998, the “Las Vegas Sun” wrote: “The body of Shauna Maynard, 17, was found Tuesday morning. She was dead at the scene. She had been shot several times, police said. Maynard was reported missing on Dec. 31 and was believed to be a runaway from Norco, Calif.

The question, at this point, arises naturally: is the lifeless woman portrayed in the photo really Shauna Maynard?

And what about the second girl, whose presumed corpse appears forced into a cardboard box? Well, we don’t know anything about this woman at the moment.

After days of silence, the alleged serial killer speaks again. And he still does it on the columns of 4chan, /b/ – Random.

It’s September 22, 2015. Same script but male victim. The blank sheet reads: “I’m back! /b/ 9/22/15“. The post is very concise: “dying dying“. Attached to the post, a photo depicting a bare-chested man, his face bleeding and suffering. The man has a goatee and wears a necklace. A strip of paper, applied to the photo, covers the eyes, so as to conceal the face of the victim. Eight minutes pass: the anonymous and presumed serial killer posts a second photo. The post reads: “dead“. A new photo of the man appears: the detail on his face testifies to the apparent death of the man. Again the strip of paper to hide the face. On the right, covered by the two photos of the man who first was dying and then died, there is a glimpse of a third photo: the body of a woman, with her t-shirt raised to reveal a black bra. In all likelihood, it is the corpse of the woman whose photos were published by the unknown subject in August 2015.

A few minutes later, the alleged serial killer published a new post: “I’ll be back in a month to finish our game. If the date is not updated, it’s not me“. Attached, there is a strange photo: a man wearing a red balaclava, sunglasses. In his hand, a kind of rifle.

The alleged serial killer’s tracks are lost. Everything is silent. It is difficult to assess this matter with rigour. A story that feeds on reality and doubt. A well-conceived joke or, on the contrary, a skilful serial killer who boldly challenges the global web audience and investigators? The doubt, at the moment, remains.

The background to this ambiguous, intricate story that walks on the labile border that separates reality and urban legend, 4chan. An authentic market in which mankind pours passions and perversions: A bottomless container, constraints and censorships of exhibitionism, voyeurism, mythomania. A website where a real killer – David Kalac – and an alleged and never ascertained serial killer can publish photos of corpses, photos of people who were killed. 4chan, on the other hand, is in the middle between the surface web – that is, indexed by the most common browsers and search engines (Google, Explorer, etc..) – and the Deep Web commonly understood, accessible only through special browsers (above all, Tor). 4chan, therefore, floats in that limbo in jargon called “Bergie Web”, the last level – already abundantly submerged, dark and obscured – of the normally accessible web.

Internet as the favourite and privileged frontier of criminal exhibitionism. A treasure chest, often inscrutable, of secrets and enigmas. The human abyss within the reach of computers.