Cursed dolls and puppets. Much of the horrific, cinematic and literary production has taken its cue from these toys to give life to stories of pure terror. Do the murderous dolls also infest music? Here are seven songs starring the most terrible artificial ladies.

Does the name annabelle, ring a bell for you? Well, this song follows the narrative path of her story and other similar ones: a fortuitous purchase, strange steps into the night, enamel eyes staring at you.

Jonathan Coulton’s story is enjoyable, he can be followed even without a translation. The originality is found almost entirely in the sound, which mixes the motif from music boxes to peaks in pure rock style. If you like the Rolling Stones and the cursed dolls, this song is for you. And don’t forget that when you prepare a snack, the doll, up there in its box, also wants one.

Surely, some of you will know the story of the Nutcracker and the Mouse King, a lucky story by E.T.A. Hoffmann and even more notorious ballet by Tchaikovsky. Could the steampunk group spokesman miss the opportunity of a piece on the bizarre uncle Drosselmeyer?

The piece actually mixes two of Hoffmann’s works: The Nutcracker, as we said, and The Sandman, where Drosselmeyer’s counterpart, Dr Coppelius, gives life to a mechanical doll, not always with good intentions. In the piece, we see the creation of the doll, presented as the daughter of Eva and Lilith, made of fiber and flesh and blood, but always incorruptible. The doll dances and falls in love with the spectators, accompanied by a sensual cadence full of dark eroticism.

The famous Miku Hatsune, who in the hands of Madoka Kurosawa, in perfect electro-baroque style, lends the voice to Noalgoble, a murderous doll.

Who is Noalgoble? A nice puppet in the shape of a black rabbit who is persuaded by a witch to kill his mistress to take on the appearance. After murdering the girl, however, the doll Noalgoble falls into despair and is looking for a new victim to sacrifice to the witch to ensure that his mistress comes back to life, opening a circle of death and destruction.

Taking a look at the official video of Blue, we can only enter into communion with the protagonist, held captive by cursed dolls and… masquerades.

Metal, gothic or pop, even using the cursed dolls as a catalyst for distressing feelings, The Bithday Massacre stages a real suffocating set. We have a heroine trapped in an obsolete house, broken dolls and dolls walking to capture her and take revenge. The girl has in fact destroyed, amputated, broken the pile of toys that surrounded her.

Let’s skip to video games now. Mad Father, a 2D game developed by Sen, tells the story of the misadventures of little Aya Drevis struggling with the terrible consequences of her father’s experiments. What does the cursed doll have to do with a mad scientist?

The real goal of the father-scientist is to preserve the beauty of his daughter. And by preserving, Mr. Drevis means for eternity. What better way than to turn little Aya into a doll? A perfect toy, born from the union of the most beautiful pieces – arms, legs, eyes, mouth – of people once killed to succeed in the crazy intent.

Let’s change genre and move to the dark ambient. For those who are looking for horrific atmospheres, the Nox Arcana are an unavoidable reference point. Specializing in the creation of scary soundtracks, they can be defined as the Two Steps From Hell of the horror genre. In Living Dolls they give the best of themselves.

Prepare for a few heart strokes. We start with the usual music box and then arrive at a crescendo of laughter, always faster.

Let’s close with a beautiful song that needs some warning right away. The theme must be very dear to our distant Japanese neighbors: the cursed doll who kills to come to life is back. But unlike the other pieces, this one has some oddities: music and lyrics suddenly reversed and a disturbing voice in the background appears.

Very well. The doll has massacred – in the true sense of the word – the family that housed her, stealing her vital organs and, as can be deduced from the song, inserting them into itself. The piece opens in perfect baroque style, with harpsichord and arpeggios. At a certain point, everything is distorted into a mix of electric, classical and spoken – a sweet and artificial voice, which makes it even more terrifying. But watch out for the minute 2:45.

In that fraction, we listen to a long monologue, where the murder is explained in detail. A few seconds later, the motif is the same, but faster and faster. And then, silence. Let’s sharpen the ears. We hear a speech that we don’t understand either in English, in Japanese, in some other language. The voice of a man. Increasingly louder, more scratching. In the end, a devastated, torn, devilish scream – the devil’s whisper, the text says. And the only image of the video, the cursed doll, begins to go up and down, snappy to the point that it is difficult to block it and see what is hidden in the suddenly red background.

As in the Secrets of Wysteria, even in this case I do not recommend the vision to the most sensitive. The screaming part is really long and occupies the song from almost half to the end. The music is an overlapping of scores and voices, often very confusing and that, together with FLASH IMAGES, can cause nausea and dizziness. The musical jolt, from the slow side to the “strong” side, is not reported. Ergo, I don’t deny at least one jump from the chair. For this reason, I advise the bravest not to turn up the volume of the loudspeakers/headphones too much.

The gore is present and uncensored. But we are still in a nineteenth-century manor with a doll that makes a pact with the devil and claims victims with a simple pair of scissors. Of course, someone may be annoyed, but it’s pure fiction. And I don’t deny that, among the 7 songs about the cursed dolls, the latter is in my opinion the best. 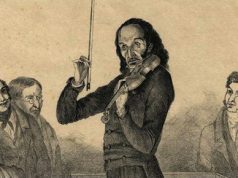 Diabolus in Musica and the Devil’s Tritone – the forbidden chord 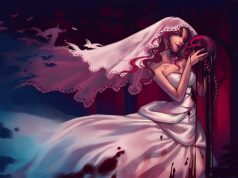