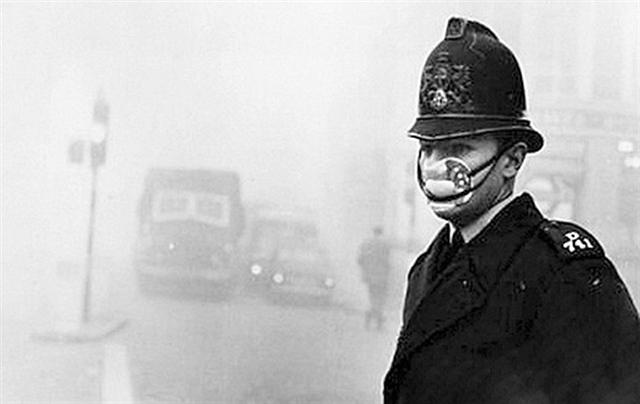 In 2007, the horror film “The Mist”, directed by Frank Darabont and based on the story of the same name by Stephen King, was released in the theatres. It was an interesting film, but unfortunately it was released at a time when survival was already cleared of customs, as well as films about man-eating monsters. The critics were not lenient and the film remained one of the least famous of those inspired by King’s novels. The plot is very simple: after a storm in a small town in the United States falls a thick killer fog inside which move monstrous creatures that kill people.

We are obviously in pure science fiction, but in London, perhaps, that film has aroused bad memories and not even so remote. Today there are only a few who can clearly remember the 1952 killer fog, but the event still echoes within the city walls and every time the fog thickly falls over the capital there is someone who makes the sign of the cross.

On December 5, 1952, a thick blanket of fog descended over London, initially ignored by citizens who were used to seeing the sun only a few days a year.

That dense fog lasted for 5 days, reducing the visibility to a few meters. The main problem, however, was that from the very first hours it caused serious respiratory problems to anyone who stood in the streets or at the window.

It was immediately clear that the fog was not of natural origin and in fact took the name of “Great Smog” and led the authorities to close schools, cinemas and all public places of great influx and to order the citizens to lock themselves up in the house and go out only if necessary.

There was no monster in the fog, but when it finally rose it left over 4,000 dead over 100,000 people who requested hospitalization (some estimates indicate that the deaths amounted to about 12,000, due to complications that lasted several months).

The causes of the killer fog

But what really happened? Well, it was a combination of factors that caused the catastrophe, most of them caused by man. The Great Smog began as a natural fog formed by the Thames, but enriched with all those pollutants that today are kept under control by strict laws in much of the world.

Those substances, the actual danger of which was once unknown, reacted by forming highly toxic and aggressive compounds, forming suspended particles of an acidic nature that covered the city and poisoned a large part of the population.

The main pollutants of that fog were fossil fuels, which at the time were consumed by almost all the inhabitants of London, and combustion developed in the days before an accumulation of toxic chemicals such as sulfuric acid, sulfur dioxide, carbon monoxide, sulfates and the famous particulate matter. This is made up of small, not completely burnt particles that form poor, thin particles that affect the lungs.

In those days there were particular proportions of the chemical compounds that gave rise to a deadly reaction for humans, also favored by the presence of another very dangerous agent: nitrogen dioxide, which facilitated the production of sulfate.

That was the worst event of air pollution in European history, with levels of deadly compounds were very high, very far from those recorded today in Italy, despite the fact that even here the quality of the air is still out of order.

A recent study has shown that something similar, with compositions similar to those of the Great Smog, often happens in the skies of Beijing, where people are forced to go out with masks on their faces and illnesses are the order of the day.

In China, air pollution reaches critical points in some periods of the year with a high density of fine dust (300/400 μg/m3) and sometimes there is a chemical composition similar to that of London in those terrible days. It is no coincidence that in China there are 16 of the 20 most polluted cities in the world.

In recent years, China has also been moving to reduce air pollution and improve air quality. The reduction of emissions of nitrogen oxides and ammonia was the first step to avoid triggering a lethal process of sulphate formation and arrive at a second silent apocalypse.