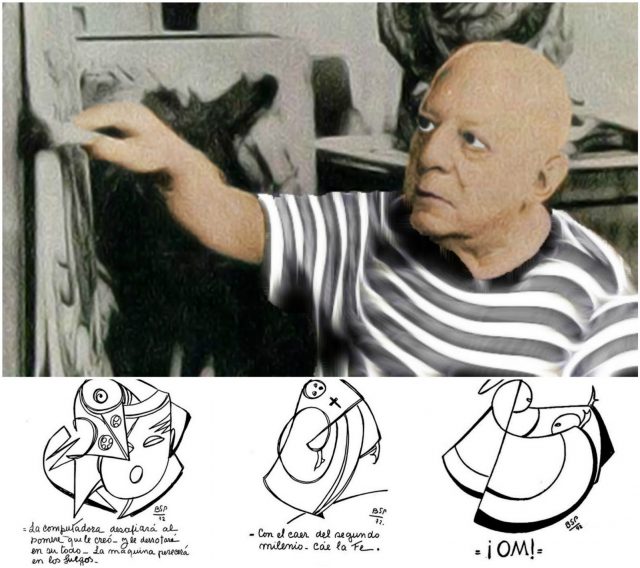 Benjamín Solari Parravicini (1898-1974) was an Argentinian painter and sculptor, best known for his prophetic drawings.

Since the ’30s, in fact, Parra began to have “spontaneous ideas” and to hear voices that guided him as he made abstract drawings, sometimes accompanied by a short text.

Parravicini and his drawings have become famous after the 9/11 attacks, when someone began to say that an Argentinian painter planned the attack, and not only that.

Nostradamus of the Americas

Parravicini was born in Buenos Aires in 1898, from a wealthy family. Since childhoodhe speaks of angels, fairies and gnomes and the father, a psychiatrist, used various tests on him to make sure he’s sane, finding no mental illness.

Benjamín became a painter and sculptor, and many of his works would be exhibited in several art galleries, not only in Argentina.

In the 30’s he began to make abstract drawings, often accompanied by a few sentences of obscure meaning, which many interpreted as prophecies.

He told to some friends that he could hear a voice that guided him while drawing and that this “spontaneous ideas.” would appear in his mind.

Benjamín is famous not only for the peculiarity of his prophecies, represented by drawings instead of simple sentences, but also because he often added precise dates to his drawings.

The attack on the Twin Towers 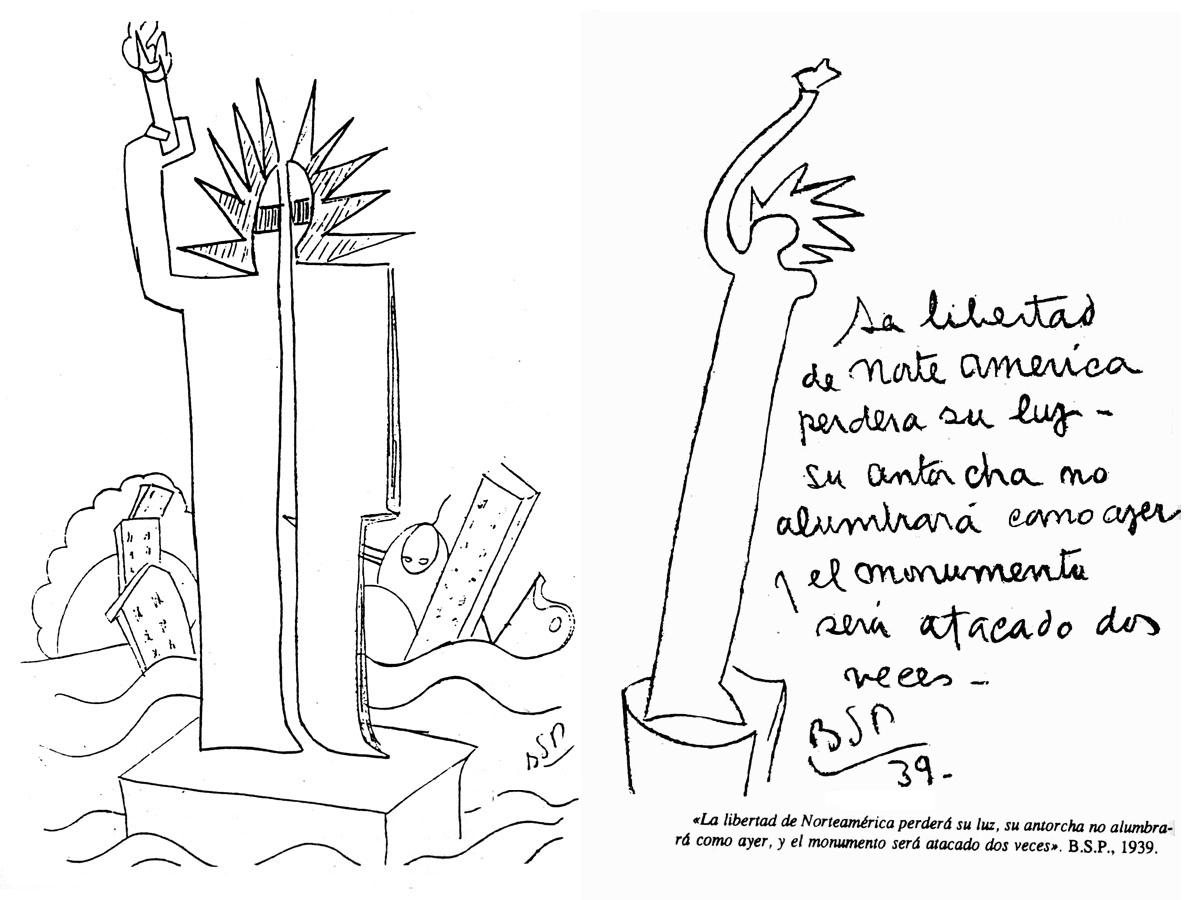 His most famous design is probably the one which, according to some, predicted the attack on the Twin Towers, made in 1939, which you can see above.

The North American liberty will lose its light. Its torch will not shine bright as it did yesterday, and the monument shall be attacked twice.

Now, in the drawing the Statue of Liberty with its torch is clearly present. In the background some buildings.

Many people interpret the buildings in the background as the Twin Towers, although there are three on one side and one on the other.

Whatthe people who believe in the prophecies of Parravicini underline, also, is the part where it says that the monument will be hit twice, hence connecting it with the two towers.

Skeptics, however, point out that the monument represented, and therefore the one to which Benjamín refers, is the Statue of Liberty and that the latter will be attacked twice.

In that case the torch that does not illuminate anymore, would be that the statue holds in its right hand.

Still, others think instead that the drawing of the Statue of Liberty is too edgy, and then maybe, given that it is also divided into two, symbolizes the twin towers. What could be exchanged for the crown, would in fact be the explosion.

Perhaps Benjamín had been told that the US symbol was attacked twice and since the twin towers did not exist, he drew what was the symbol at that time.

Nazi occupation of France and its liberation 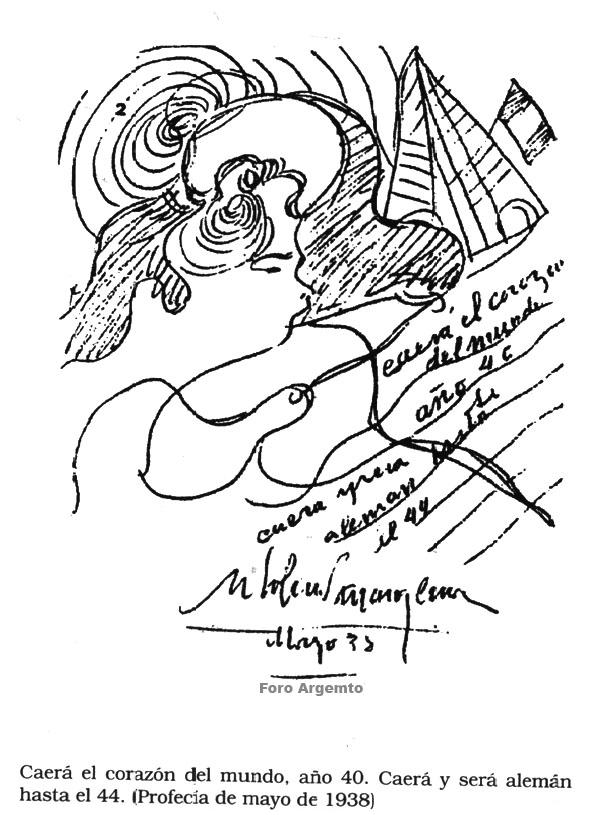 Another prophecy, made in 1938, that would happen would be the one of the fall of France in Nazi hands in 1940 and its liberation in 1944.

The heart of the world will fall, he year 40. It will fall and it will be German until 44

Many interpret the drawing in this way. The flag on the right would be the French flag and the prophecy would predict the Nazi occupation of France in 1940, and its release, which took place in 1944.

Although it seems that Benjamín precisely foretold the Nazi occupation of France, many skeptics invite us to reflect on some facts.

The prophecy was made in 1938, always granted that the design has not been done after adding a previous date.

In 1938 riots were already underway in Europe and Germany, right in ‘38, had annexed Austria to the Reich in violation of the path of Versailles.

Perhaps Parravicini, an educated man, simply suspected that Hitler would have continued to annex territories, making a generic drawing with a tricolor flag, common to many states.

If it is true that the dates are correct, then why did he not just write that France will fall? Is it possible that his “angel” was unable to say which country was in danger? 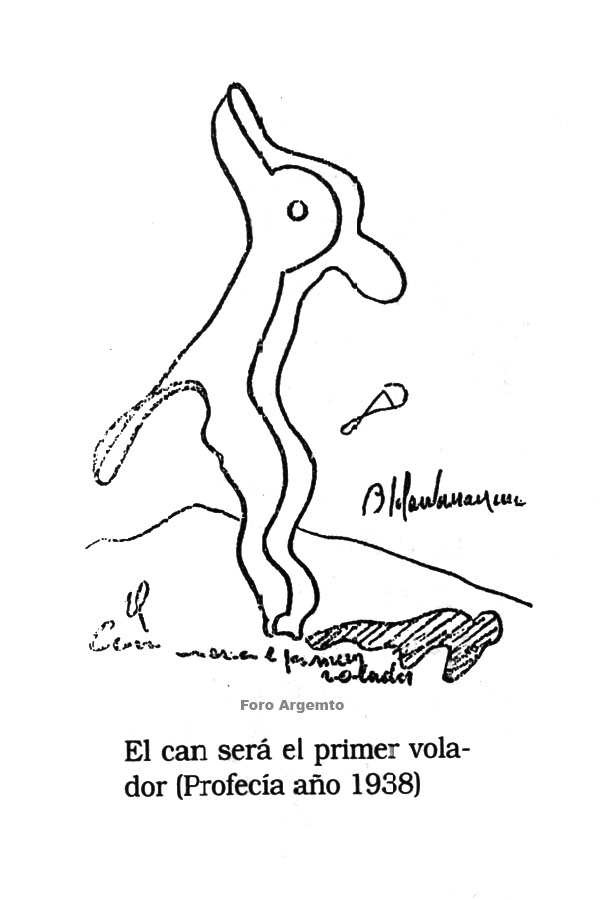 This prophecy foresees the launch of the space dog Laika, in 1957.

The dog will be the first to fly.

Parravicini’s drawings are more than 700 and collected in various books. Some believe blindly in this contemporary prophet and those who believed it was just a very educated man, with vast knowledge and that he knew very well how the world goes.

Still, others consider him a charlatan, implying that it has put antecedent dates on his drawings, so that they would seem prophecies while in reality the facts had already occurred.

Prophet?Charlatan? Or a very clever man? Have your say. 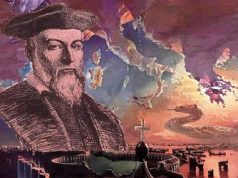