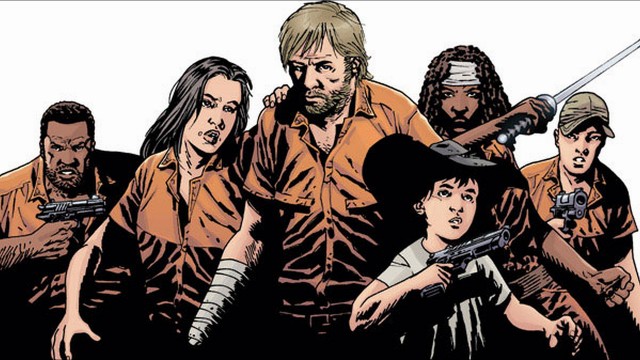 Be aware those who have not read the comic or who are not up to date with the Walking Dead series: the differences between the TV show and the comic will be a post full of spoilers.

The Walking Dead is one of the most watched TV series of the moment, but as everyone knows it is based on a comic. I’ve recently started to read it and, although the story is broadly as shown in the series, I noticed some shocking differences.

1. Daryl does not exist 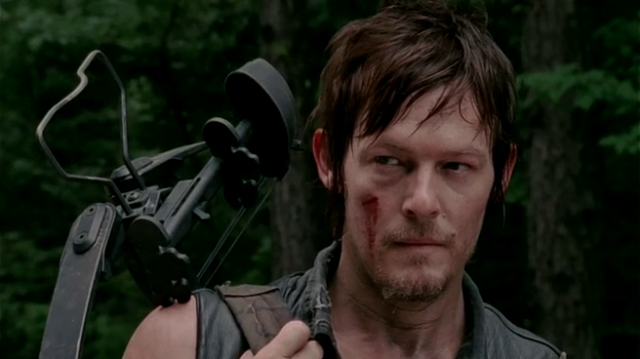 You read that right, the character of Daryl Dixon, and therefore also that of his brother Merle, does not exist! Although in the series he is Rick’s right hand man and an important character in the development of the story, in the comic book he has never existed.

Being my favorite character, I let you imagine the shock that has caused me to realize, page after page, that Daryl in the Walking Dead comic does not exist. 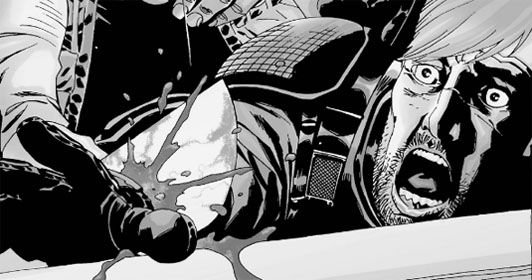 That’s right, in the fifth volume of the American comics Rick has his hand cut when he does not want to disclose to the bad guys where the prison where his family and his friends reside is. The character of the TV series is still quite faithful to the original, he is a leader even if he does not take decisions alone; in this he is mainly helped by Tyreese and Dale who are also main characters.

If you are not shocked enough, know that the person who mutilates him is … 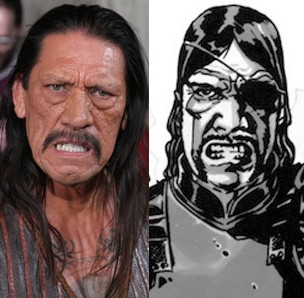 Yes, the character that mutilates Rick Grimes is the Governor, whoin the TV series is a fascinating villain, elegant and charismatic enough to make Andrea fall in love with him. And, to be honest, I also found him extremely irritating and boring.

In the comics he is instead a sadist with long hair, mustache and a strange resemblance to the actor Danny Trejo. After amputating Rick’s hand he imprisons him, Glenn and Michonne and rape and torture the latter. 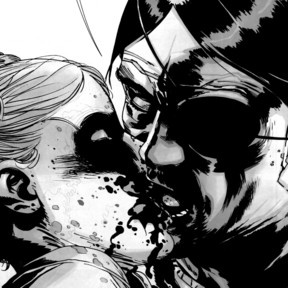 That’s not all: in the series they show how he kept his daughter as a zombie in his house, treating it as if it were still her child,combing and taking care of her. I’m sorry to tell you that in the comics the Governor has the zombie of a little girl but that’s… his girlfriend! There is a scene sees where he takes her teeth out to be able to kiss her.

After she is freed by Rick, Michonne takes her his revenge by torturing and amputating the Governor but without killing him.

4. Carol is a psycho and dies pretty quickly 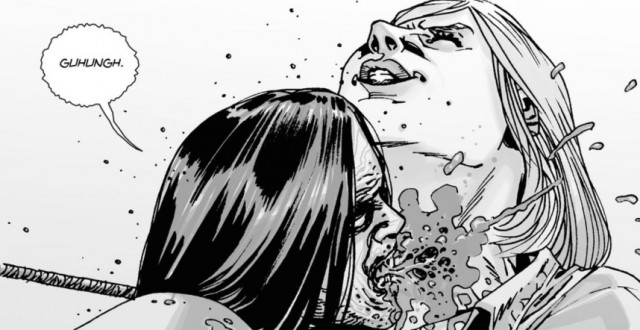 Carol is another of my favorite characters in the series of The Walking Dead, but in the comics her personality is completely different! She is a woman with self-esteem problems, disturbed, who has an unhealthy attachment to Lori and Rick and any other person who gives her a minimum of confidence.

At the prison, after her boyfriend betrays her with Tyreese Michonne, she decides to commit suicide by being bitten in the neck by a zombie, leaving poor Sophia alone. 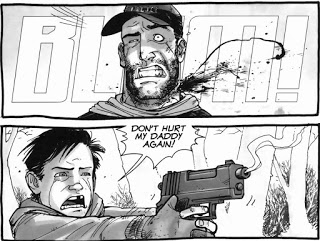 Shane’s character in the TV series is pretty important, it serves to create tension between Lori and Rick and dies only after arriving in Hershel’s farm, killed by Rick.

In the comics however he dies soon after that the group decides to leave Atlanta. Shane, Rick and Carl are in a forest to get food but Shane starts to go out of your mind because, with Rick back, his chances of winning Lori’s heart fade away. Carl realizes that the situation is deteriorating and fires a shot at Shane, who dies and is buried.

In the series Carl shoots the zombie Shane when he returns from the dead, but in the comic the characters still do not know that everyone is infected. They then bury Shane, and only after discovering that even those who die without being bitten become zombies, convinces Rick to return to his grave and kill him forever. 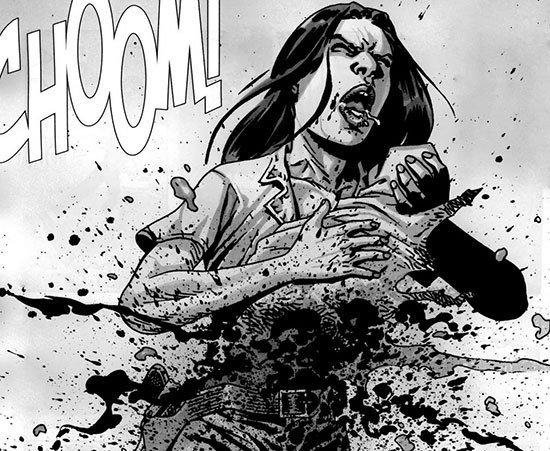 To be honest Lori has never been my favorite character and, I admit it, I rejoiced when she died. Even in the comic she is always an extremely irritating character and while in the TV series she dies giving birth to little Judith, in the comics she dies in different circumstances.

Her death happens in prison as well, but at the hands of the governor and his followers in the final battle: while trying to escape with Judith in her arms she is hit and falls to the ground with the baby.In the comic Judith dies too but, obviously, it would not be politically correct to kill a baby in a TV series.

7. Dale and Andrea are lovers

Dale was one of the characters I got attached the most, but in the TV series they killed him immediately. In the series however he is one of the main characters and, despite the age difference, he has a love affair with Andrea, who in the comics says she is 26 and is a main character too.

Moreover, in the comic, the one who losesa leg is not Hershel but Dale. After being bitten he got his leg amputated by a doctor escaped from Woodbury and he survives without turning into zombies. Later, however, he is kidnapped by the Hunters,who do not exist in the series but are replaced by the Terminus people. After being kidnapped the Hunters amputate his other leg to eat it not knowing that Dale had been bitten by a zombie and that his flesh is contaminated. This part in the series is done by Bob, an alcoholic African American. When Dale dies, Andrea goes with Rick.

In the first part of the comic Tyreese is a main character: he is the right arm of Rick and not the whiner of the series, but a leader. He begins a romance with Carol but betrays her with Michonne.

He is taken hostage by the Governor and beheaded in front of the prison. 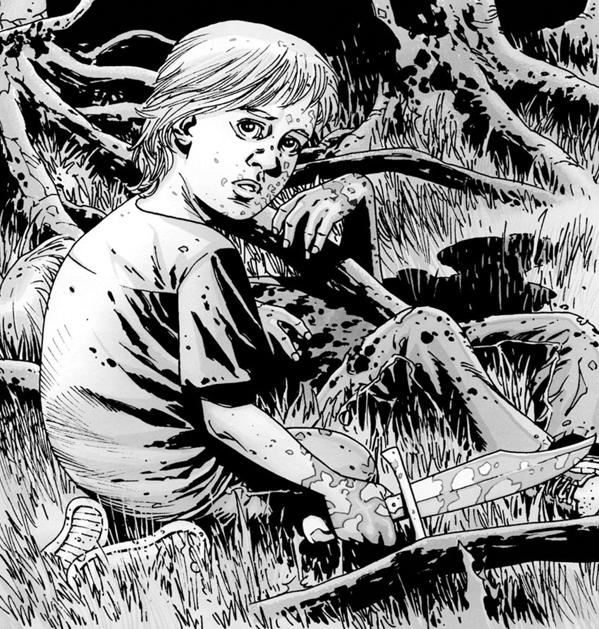 The twins in the comic are the children of a couple that does not exist in the TV series and they are about 7.

After being left orphans they are adopted by Dale and Andrea, but the head of one of them has something wrong and, one day, he stabs his brother.

In the series they have been replaced by two random girls, one of them goes mad and kills the other, leaving Carol the thankless task of dealing with the situation by killing the murderous child.

In the comic instead the murder-twin is killed with a gunshot by Carl.

10. Carl is still a child (and with one eye missing) 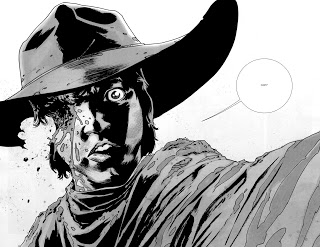 In the TV series Carl starts as a frightened and helpless child, we see him grow, become a teenager and a pretty important character.

In the comic he remains a scared child for a long time, who begins to change after the death of his mother and sister. He understands that in this new world of zombies you have to do unimaginable things to survive and kills one of the twins. Despite this he will always feel remorseful, crying frequently and having trouble sleeping.

In the series the character is inevitably grown up because in the series years pass by just like the ones in reality. In the comic this doesn’t happen: when they get to Alexandria, where they still are at this point in the series, it’s only been a little over a year after the zombie holocaust. It’s right in Alexandria that Douglas, the head of the district, accidentally shoots at Carl causing him to lose an eye. During the sixth season of The Walkng Dead we see Carl being shot, losing an eye. However it wasn’t shot by Douglas but by another kid. 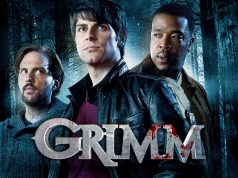 Grimm – what would the world look like if fairy tales weren’t made up?