Incubus and Succubus are sleep demons. They can infest both men and women, but while the Succubus absorb, the Incubus release. For centuries there have been traces of these demons in history and in the past they were used as an explanation for nocturnal emission, especially by monks, and undesired pregnancy.

The Succubus were considered female demons. The latter took the form of a woman to lie with a man, stealing his energy and semen. Precisely because of this characteristic they were used to explain the nocturnal emissions, that is, those involuntary ejaculations that occur in sleep, and therefore especially at night.

Incubus, on the other hand, were considered male demons and cause of bad dreams. Furthermore, according to the legend, the Incubus used the seed taken from the Succubes to inseminate women, thus giving life to beings more prone to be influenced by the devil. They were also used to explain unwanted pregnancies. This insemination took place because Incubus and Succubus are sterile and this would be the only way they could have offspring. It is precisely from one of these unions, for example, that the Wizard Merlin was born.

If for men to be attacked by a succubus was not so bad, since it was a matter of having relationships with a young, beautiful and sensual girl, women were reserved a different fate. Incubus, in fact, committed a real violence against the victims, inflicting pain with members of large size and covered with thorns.

According to the belief, Incubus wore pointed hats on their way out into the world of mortals who sometimes lost. The man who found one of these hats would also find great treasures.

How to defend yourself from Incubus and Succubuses 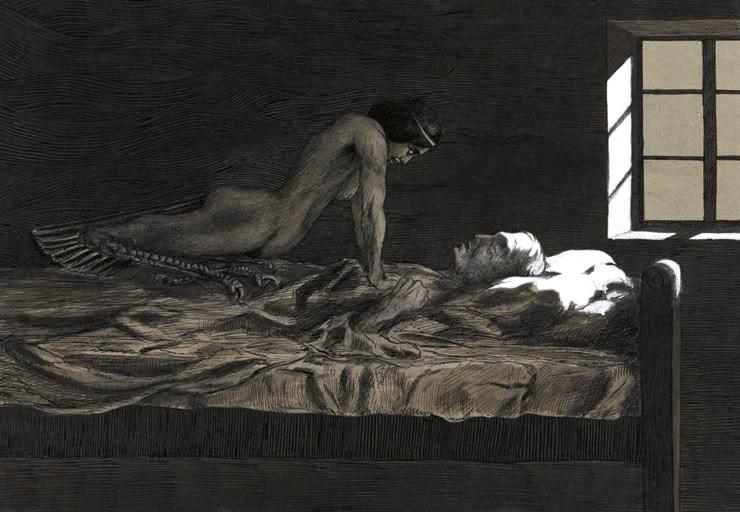 In ancient times there was a great fear of these sleep demons and, consequently, there were also remedies for not being attacked by these entities. Pliny the Elder advises to do, morning and evening, massages with a particular decoction. The ingredients to make it are: tongue, eyes, gall and snake guts. Once decocked it had to be cooled in wine and oil for 24 hours.

Nocturnal paralysis (to which I have dedicated an article) is a sleep disorder due to which it is possible that a person wakes up, but is completely paralyzed. This state can last a few seconds or a few minutes and is the cause of much anguish for those who try it. Someone may also feel heaviness and constriction on the chest and it is probably this symptom that caused it, in the past, to be attributed to incubus and succubuses.

According to the legend, these demons, before possessing the man or the woman they had decided to attack, sat on their chest.