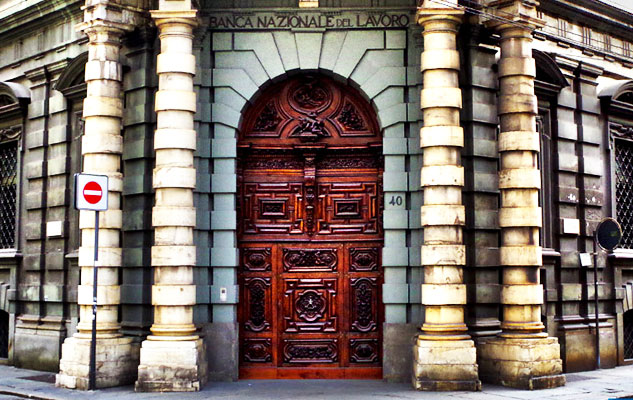 In Turin, Italy, in via XX Settembre, there is an imposing palace, which currently houses the Banca Nazionale del Lavoro, known as “The Devil’s Palace”. This nickname is due to the name of its gate which is known as the Devil’s Door.

If someone is in Turin and wants to go and see the Devil’s Door just leave from Piazza San Carlo, turn left into Via Alfieri and a block later you will be at the corner with Via XX Settembre.

Historical origins of the Devil’s Door

The palace was built by Amedeo di Castellamonte for Giovanni Battista Trucchi di Levigaldi, Count and General of Finance of Carlo Emanuele II. The door, instead, was commissioned by the same Count Trucchi and was built in Paris by Pietro Danesi in 1675.

The door owes its disturbing name to the bronze clapper representing Satan with horns and a wide open mouth with two snakes inside.

According to popular belief, the Devil’s Door appeared on a night when a sorcerer practicing the magical arts invoked Satan. The latter, annoyed by the call, imprisoned him for eternity inside the door.

Probably the people have nicknamed the building “House and/or palace of the Devil” for the disturbing events that took place within it.

It is said that in the 19th century, during the French occupation, Major Melchiorre Du Perril, before leaving to deliver secret and important documents, stopped in the palace to have a quick meal but never left.

It is said that twenty years later, during the renovation works, after having knocked down a wall, the workers found a skeleton, maybe it was the missing major Du Perril?

The Devil’s Door and the legend of the dancer

In 1790 the palace belonged to Marianna Carolina of Savoy and it is said that during a carnival party a dancer was stabbed to death. Neither her killer nor the murder weapon were ever found.

That same night in Turin a violent storm broke out with rain, blinding flashes and thunder so strong and deafening as to break the glass. A cold wind blew inside the building making the guests flee from the fear.

In one version of the legend it is said that a short time later, inside the palace, a ghost of a young woman was spotted wandering around the rooms, while in another version it is said that the day after the assassination a picture appeared depicting the young woman dancing on the flames of hell.

It is said that in 1600 the palace was the seat of a tarot factory and this according to esotericists is further confirmation that the black magic is linked to the building. In fact, the tarot card associated with the Devil is the number 15, which at the time was also the house number.

However, whether by chance or not, the bus that passes through those parts is the number 15.

Obviously someone more realistically says that the nickname “House of the Devil” is due to the fact that the building was the home of the Minister of Finance, but it is known that in every legend in the end there is always a background of truth.