Villisca is a quiet town in Iowa, United States. In 1912, the pace of life there is slow, everyone knows everyone else and no one is prepared for what will happen on the night between 9th and 10th June of that year: a whole family will be brutally killed with an ax while in their sleep.

The house in which the events took place still exists and tit’s possible to book a night tour.

On 9thJune 1912, the Moore family, made of father, mother and four children, went to church like every Sunday.

There the children met two girlfriends whom they decided to invite home for the night after the Children’s Day,

an event held every second Sunday of June that introducing children to the church.

The Moore spouses then called the parents of the two girls and asked them permission, and they agreed to. At 8pm they went to the Children’s Day and an hour and a half later they were already on the way back.

The next morning at about 5 a neighbor came out of her house to hang out the laundry. At about 7 she noticed that no one had yet come out to run any errands or feed the animals and noticed that the house was strangely quiet.

Between 7 and 8 she then decided to go check and knocked on the door but did not get any response. When she tried to open the door he found it closed and so decided to call the brother of Josiah Moore, the head of the family.

Ross Moore, went to his brother’s home to check on them. He knocked on the windows shouting his brother’s name and, as he did not receive any reply, entered the house using a copy of the keys.

When he entered the bedroom he saw the bodies of the two little girlfriends covered by sheets dripping with blood;he immediately went out and told the neighbor to call the sheriff.

The sheriff began to inspect all the bedrooms and found a corpse in every bed.

All family members had been killed with an ax, hit in the head and then covered with sheets.

All the curtains were drawn and all the mirrors covered with sheets. In front of the beds oil lamps were found and an axe dirty with blood was also found in the bedroom of the two little friends.

In the kitchen, on the table, there were a plate of food and a bowl full of blood-stained water while in the hallway two pieces of bacon were found.

Unfortunately in those days the police did not have many tools at their disposal and the culprit was never found. 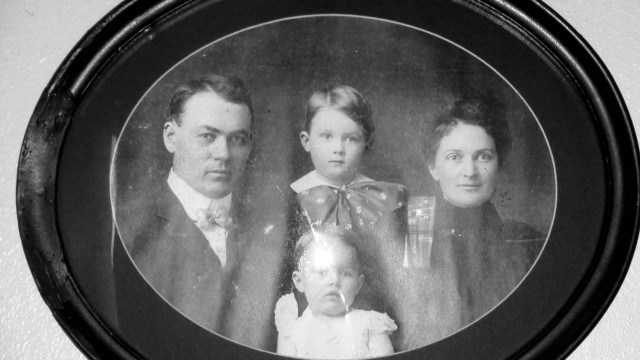 Although no one was ever convicted of the murders, there were several theories about who could have done it. One of the suspects was the Reverend Kelly, who was at the Children’s Day the night of the murder and that left the city the very next morning. He was charged twice and twice found not guilty.

Joe Ricks was initially arrested because he got off a train the day after the murder with shoes covered in blood, but the evidence was not sufficient. Some suspects also included almost all the city’s homeless, but no evidence was ever found against them.

It is also thought that the heinous murder could be the work of a serial killer.

In fact in those years state similar murders occurred which resembled this one and Detective Wilkerson had an idea who the culprit might have been: William “Blackie” Mansfield.

The detective thought that Mansfield was not only responsible for the murder of the Moore family, but also that of his wife, his son and his in-laws, which took place in 1914.

Both murders showed the same modus operandi: the victims had been killed with an axe and then covered, the mirrors were covered,on the floor in both crime scenes several oil lamps were found and in the kitchen there was a dirty basin of water mixed with blood.

Thanks to Wilkerson’s report, Mansfield was arrested in 1916 but the defense proved that during the massacre of the Moores he was in another state and was thus acquitted.

The massacre of the Moore family still remains a mystery and their murderer remained free to roam around the country, perhaps even free to kill.