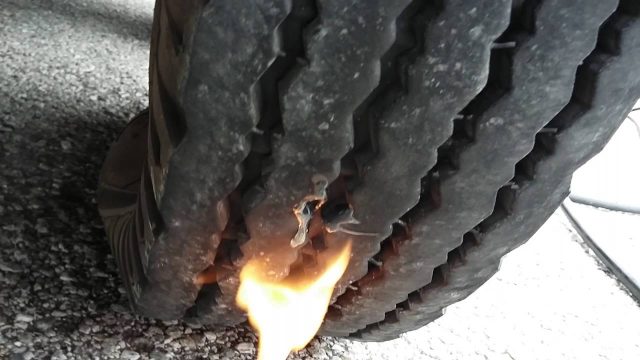 Necklacing is a form of torture executed in modern times, born in the mid-80s in South Africa.

Execution of the necklacing torture

The execution of this torture is quite simple: bind the hands and feet of the victims and then put a rubber tire around the neck, sometimes forcing it on the shoulders to immobilize the victim, just like a necklace.

Then sprinkle the rubber tire with gasoline and set it on fire. Death is slow and terrible, as the victim is burned alive.

The first episode of this torture is traced back to March 23, 1985 when a group of people killed Benjamin Kinikini, a local counselor accused of corruption, and his family.

They were dragged out of their house, stabbed and then lit on fire. In this case the cause of death were the cuts done with knives, but it is this episode that started the long trail of violence that followed.

In July 1985, a young South African girl, Moloko, declared that his sister had been burnt alive after she had been put a tire around her neck and that pieces of glass were inserted into her vagina. Once dead she was then hit with a big stone in the face.

The first images of this torture were immortalized by reporter Kevin Carter (the author of the picture with the child and the vulture) in the mid-80s.

He said that what he had seen and photographed had horrified him, but he was also shocked by what he was doing: taking pictures of torture.

Thanks to that reportage the media became interested in the phenomenon and Kevin thought maybe his photographs could have done something good.

However, when cases of torture of the series began to increase after being covered in the press, the reporter wondered if all those episodes would have happened be if the media had not spoken of the torture. And this is a question that has followed him for his whole life.

The torture of the rubber tire in the world

Despite the torture of the necklacing was born in South Africa and is connected to this African country, it is also found in other parts of the world. Cases of torture using a tire have been found in Haiti, in the Caribbean, against the supporters of the dictatorship of Jean-Claude Duvalier from 1986 to 1990. In 2010, there were 45 cases reported.

In the nineties this type of torture was also used in the Ivory Coast by some students to punish thieves who stole college campuses.

One of the latest cases of death done with this torture was in 2006, in Nigeria.

It is particularly used in Brazil by drug dealers who call it micro-ondas, a clear reference to the microwave.