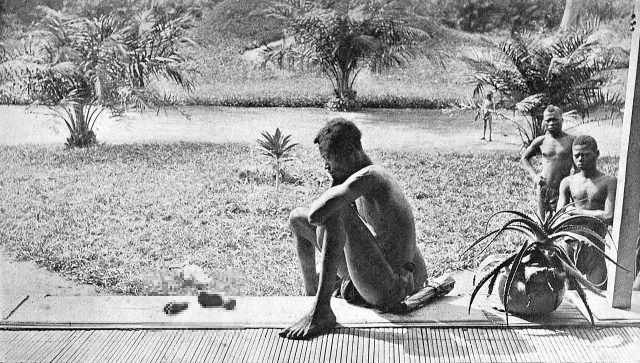 The photo you see above dates back to 1904 and portrays Nsala, a Congolese man. But what is he looking at with such a distressed look? The answer will leave you astonished. Nsala is looking at the severed foot and hand of his 5-year-old daughter. This historical photo made Nsala and Boali two key names in the sad history of Congo, but the sad thing is that this shot is much worse than it looks.

You mean, worse than a man looking at his daughter’s severed limbs?

To understand how and why, however, let’s take a step back.

The Congo Free State corresponds to the current Democratic Republic of Congo and was a private kingdom of King Leopold II of Belgium. The king ruled it from 1885 to 1908 under a dictatorial regime and unspeakable atrocities were committed in his name. Congo mostly had unexplored territories and had no great economy. Leopold II therefore decided to make the most of the country to generate an economic return. He divided the country into several sections and put in charge of each of them a European staff consisting mainly of mercenaries. One of these sections was called Domaine Privé (private property) and all the earnings produced went directly into the pockets of Leopold II.

The sovereign soon managed to profit from the Congo Free State, but for him, one of the richest men of the time, it was not enough. He then decided to cut the officers’ salaries and replace them with commissions that varied according to how much the area of their competence was able to produce. 35% of the population was used as a labour force, becoming in fact a slave.

One of the greatest resources of Congo was rubber, which the natives had to collect. To extract it, they cut through the plants from which it was produced and then rolled over it to stick it to their skin. Once dried, it was removed from the body, with much pain. One kilo of rubber, which had cost 1.35 francs to produce, was sold in Europe for 10 francs. After some time, the reserves of rubber began to shrink and could no longer cover the quotas required by Leopold II. This is where violence (more than the violence already in use) comes into play.

In order to enforce the quotas, the Force Publique was set up, led by Europeans but with a troop made of indigenous people. This sort of police force terrorised the population, carried out various atrocities and even burned entire villages. When someone could not produce enough rubber, he was shot dead.

The officers, however, feared that the bullets would be used, instead of killing the locals, to hunt and so they forced the troops to bring them a severed hand from the corpse for each missing bullet. The hands soon turned into trophies to show and the more hands they carried, the more praised they were. When the established quota of rubber was not reached, it was enough to integrate it with a few severed hands and everything settled down. The severed hands were so appreciated by the officers, that the soldiers began to amputate the hands of living people, leaving them to bleed to death.Some peple, during the Force Publique violence attacks, pretended to be dead and remained motionless even when their hands were cut off, and then sought help later.

And here we are, finally, talking about Nsala and Boali. Nsala was a man whose only fault was not having collected enough rubber to enrich the pockets of a foreign king who had imposed himself by force on his land. As punishment, the troops amputated the hand and foot of his daughter Boali, just 5 years old, and only after doing that they killed her. But not satisfied with this, they also killed Nsala’s wife. But perhaps even this did not seem an appropriate punishment, so they cannibalized the bodies of Nsala’s wife and daughter, bringing the remains of her daughter to the man.

The historical photo was taken by Alice Seeley Harris, a missionary who photographed and denounced the abuses in Congo. In 1908, finally, thanks to the pressure of public opinion, and the discovery of atrocities, Congo was annexed to Belgium, taking the name of Belgian Congo and putting an end to torture.