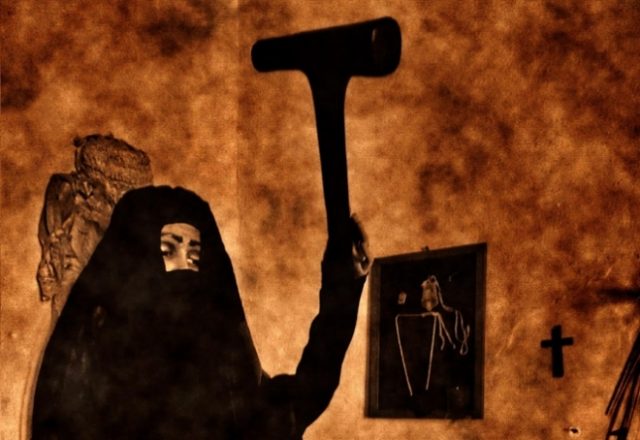 The ritual of the Accabadora was a bloody, tragic ritual in use in Sardinia, Italy, until a few decades ago. It was “necessary” to make elderly and sick people pass away quickly.

The Femina Accabadora means “the one who ends“, perhaps from the Spanish verb “acabar” with the meaning of “put an end to”.

Usually it was an elderly woman, who lived a little isolated from the local community, perhaps a sort of midwife, the “shaman” of the village. At night, she almost sneaked into the room of the unconscious dying, completely dressed in black and with her face covered. She had all the sacred images and objects to which the dying man could be particularly be attached to removed from the room, so as to make the separation of the spirit from the body simpler and less painful, at least on an affective level. Then she proceeded with a sort of ritual assassination – with the full awareness of the victim’s relatives – aimed at putting an end to the physical suffering of the elderly, the more or less “terminal” sick person. A sort of very bloody euthanasia.

The poor and unconscious victim could simply be suffocated with a pillow or – more frequently – hit on his forehead or nape of the neck with a particular, heavy hammer of olive wood, called “su mazzolu“. A curious variant, less bloody but not more pleasant, could be to strangle him by placing his neck between the legs of the merciless “Accabadora”. “Su mazzolu” was made from a solid piece of olive tree (the head of the hammer), from which a smaller secondary branch branches off, which, when properly cut, became the handle of the unusual weapon.

But the ritual of this unusual euthanasia also involved placing under the pillow of the dying man, for at least three consecutive days, a small yoke that had the task of remember to the dying man his life of work in the fields, with the oxen with the yoke that pulled the plough.

Was the patient or the elderly not responding positively to this attempt at treatment? Don’t worry. Accabadora, together with the relatives of the “victim”, proceeded with Ammentu: she whispered in the ear of the unfortunate person all his sins, so that he could repent. This ritual could make him immediately pass away, because of the psychological weight of what he did in his life, or make him resume for the fear of ending soon in the flames of Hell.

If the Accabadora did not perceive signs of improvement, she would proceed with a shock therapy wrapping the sick person in a sheet soaked in frozen water and locking him up in a barrel, officially to lower the body temperature in case the “victim” had fever. But a beautiful fulminating pneumonia was always on the lookout for a brilliant solution to the problem.

The tools of the trade of Our Lady of the Hammer

The figure of Our Lady of the Hammer was also widespread in the Salento peninsula.

Today for those who want to examine “su mazzolu” as well as many objects related to the rural traditions of an old Sardinia, could make an interesting visit to the “Galluras Museum”, in Via Nazionale in Luras (Oristano), where two nice inhabitants of Gallura have preserved objects, history, memories of traditions and daily life of the place.

Including the tools of the trade of some Accabadora exercising until not long ago the altruistic profession.