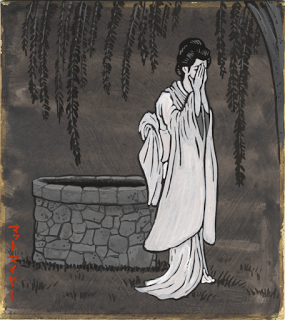 It is one of the most renowned Japanese ghost stories the basis of the novel Ringu, which was made into the Japanese film and then the US remake called “The Ring”. Legend tells of a girl who was thrown into a well and died, returning to earth as spirit to torment who killed her.

This story is about a girl named Okiku, but its origin remains unknown. The first written mention of it is dated 1741, under the name of Bancho Sarayashiki, and it was related to a theater play. Being a well-known legend, many versions and many adjustments have been made, but the following reports what was said according to the traditional version.

Okiku was a very beautiful girl who worked as a servant for the family of samurai Aoyama Tessen.

The samurai did often offer sexual proposals to Okiku, but she always rejected him.

One day Aoyama decided to hide one of 10 porcelain plates belonging to the family, accusing Okiku to have lost it. Losing or breaking such a valuable plate was punishable by death and when Okiku learned about the missing piece, she rushed to count the remaining ones, sure not to have broken any.

She counted and recounted them frantically but the plates were always nine.

The samurai then offered her a deal: he would have spared her life, but she would have to become his mistress. Okiku refused and the samurai, full of rage, threw her into a well, killing her.

Okiku became a vengeful spirit (onryō) who tormented her murderer by counting from one to nine and then letting out a bloodcurdling scream that was supposed to represent the missing plate.

Or maybe, tortured, she was still looking for the tenth plate. In some versions, the spirit would have been exorcised shouting “ten!” after it had counted up to nine. Okiku would then thought the tenth plate was found so she could rest in peace. 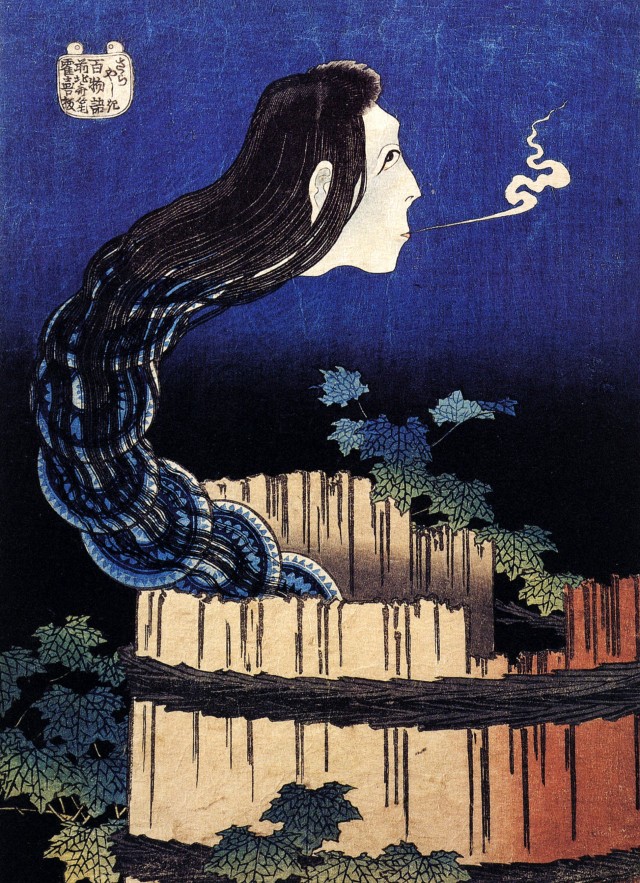 Hosokawa Katsumoto was the Shogun of Himeji castle and one day became very ill. His heir should have been Tomonosuke who thought of donating 10 precious dishes to Katsumoto in order to secure his succession.

Another of the possible heirs, however, Asayama Tetsuzan, was told about the gift of his rival and wanted to sabotage his plan and forced his servant’s bride-to- to help him.

Tetsuzan hired a spy to see where the plates were stored and ordered him to steal one. Then gave the order to bring the remaining nine to his chambers. Here Tetsuzan called Okiku upon him and tried to seduce her but she refused to give in his advances.

Tetsuzan then accused her of stealing one of the plates. He proposed her to become his mistress in exchange for her life but Okiku refuses. Angry, Tetsuzan beated her with a wooden sword.

Subsequently he suspend her above a well where he forced her to go up and down, being held to a pulley and hitting her with a wooden sword every time she re-emerged to the surface.

He asked her again to be his mistress and to help him kill the Shogun, but upon her continued refusal he plunged her into the well, killing her.

Shortly after he heard a voice coming from the bottom of the well that was counting plates and so realizes that it was the ghost of Okiku. Unmoved, every time when he saw the ghost of Okiku appearing in front of him, he would just stare at her.

In 1655, a vassal of the shogun, Aoyama Harima, fell in love with a young servant named Okiku. Aoyama promises to marry her and when he receives a marriage proposal from a rich relative he refused it, reassuring Okiku of his love for her.

The girl, however, was not convinced and asked him to prove his love to her. She took one of the ancient and precious plates belonging to the Aoyama family and broke it.

The family, being fond of Okiku and thinking the girl broke it by accident, forgave her but she admitted she did it on purpose as a way to test his love.

Aoyama then got angry and killed her throwing her body into a well.

Since then, the ghost of Okiku was seen entering the house and counting the plates from one to nine. One day Aoyama spotted the ghost in the garden and saw that her face was not vengeful, but calm and beautiful.

He then decided to do seppuku and kill himself and reach his beloved in the afterlife.