Blood Eagle was a method of torture and execution in force in the Nordic countries, especially among the Viking population. Although this ritual is described in various ancient texts, some scholars argue that it was never implemented.


The method of this viking execution is atrocious and it consisted of having the sentenced person bending forward on a big rock or a pile of wood with his hands and feet bound. Subsequently an eagle with outstretched wings was drawn on the victim’s back and then

an incision was carried out, exposing the spine. The next step was to remove the ribs from the spine with an ax,

one by one, pulled open to the outside with flesh and muscle still attached and then sprinkle salt on the open wound. The extraction of the lungs was then carried out, and then stabbed in within the exposed ribs. The ribs, open and bloody, looked like the wings of an eagle, which gave the name to this type of torture. 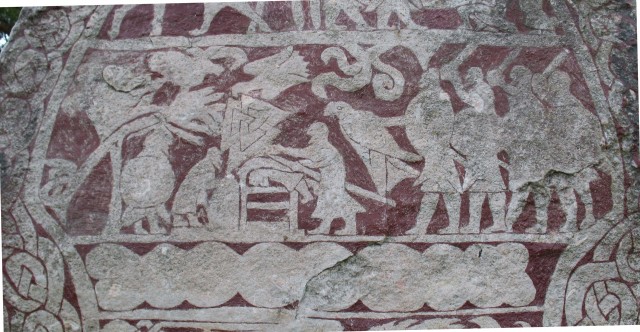 This method of torture is currently much debated. Although written mentions can be found, some scholars think that in fact this rite was never practiced in reality. This misconception is perhaps due a mistranslation from the Viking language to Scandinavian, when some figures of speech or similarities have been misinterpreted as an excruciating ritual. However, there is a term in ancient Nordic language, blóthorn orblóðörn, which means Blood Eagle and would indicate, indeed, that a ritual with that name actually existed.

It is said that in 867 the king of Northumbria was murdered by Blood Eagle by the Vikings.

According to the scholar J.M. Wallace-Hadrill other potential victims of this barbaric method of execution may have also included Halfdan, the king of Norway’s son, King Maelgualai of Ireland and even the martyr Edmund of East Anglia.

This method of execution was portrayed in the TV serie “Vikings”