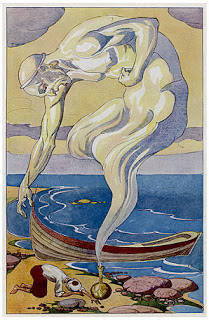 The jinni, often translated as “genie”, is a supernatural creature from the pre-Islamic and Muslim culture. Almost always associated with malignancy, they are often present in Middle Eastern tales and legends and they are a constant presence in the book “The Arabian Nights” Even the genie that comes out of Aladdin’s lamp, the famous tale taken precisely from the One Thousand and One Nights, is a jinn.

The origin of the Jinn

The Koran, thanks to Allah,brings their creation back to the beginning of time and states that

Even the jinn have their own social organization, which includes kings, courts, marriages and deaths, just like the human ones.

Tradition has it that there are 5 types of jinn, starting with the strongest Maryd, the Ifrit, the Shaitan, the Jinn, until we get to the weakest Jann, while some other sources divide them into three categories:

Despite being described as mostly malignant, some jinn are not, and can even grant wishes to men.

According to tradition, moreover, Allah was the one to give them the powers they have but not their evil disposition and they are therefore responsible for their actions before Allah and will go to heaven if they deserve it.

The powers of the Jinn

One of their powers is to change their appearance, being able to transform not only into objects or plants but also into animals and even men in order to achieve their purposes.

The jinn can, however, also possess people, just like the demons in the Christian religion. The purpose of the possession, according to some, would be to make people worship idols and not God, thus making them fall into sin.

In this regard, I read the article of a site dedicated to Islam, speaking precisely of the Jinn, where they talk about the example of Indian statues drinking milk. I do not know if you remember, but a few years ago videos of Vishnu and other Indian deities statues went viral as they apparently drank milk.

According to the article I read this would be nothing but the joke of a jinn, an attempt on worshiping idols that are not God. It happened in 1995 and there are not many videos available, but I found this:

The jinn are typical of Islamic and pre Islamic cultures but there are correspondents in other religions and areas of the world, as in the Canary Islands and among a tribe of Sierra Leone.

Let’s not also forget the genies of ancient Rome, spirits who watched mankind and they were responsible for their actions and their characters. But there were also the bad genies that fought the good ones.

As we can see “jinn” is simply the Arabic name used to identify entities with powers, often evil, responsible for some strange men behaviors.

Entities that can be evil but they can also help a human being and that can be identified with ghosts, demons, ghouls and spirits of other traditions.

Therefore, despite all the differences that different religions and different populations may have, they all have in common the belief that spirits or genies have control over human actions and even human destiny.

Suggested reading: on this topic, I would definitely recommend “One thousand and one nights” when nearly every single story has a jinn as the main character, and they help or destroy the protagonist. I recommend you “The Arabian Nights“.