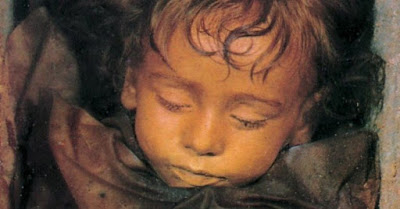 Rosalia Lombardo was a baby girl born in 1918. Unfortunately she died from pneumonia two years later.

Her father, inconsolable, decided to embalm his beautiful child in order to keep her close forever.And for this, he contacted Alfredo Salafia.

Salafia used a secret technique, thanks to which, after 95 years, we can admire the face of Rosalia, exposed in the catacombs of Palermo. The girl was one of the last to be able to be placed there, and is still in the Chapel of Santa Rosalia today.

The ingredients Salafia used for embalming were a mystery until 2009 when, while studying notes, the solution was found.

The ingredients used were formalin, alcohol, glycerin, salicylic acid and zinc salts. The mixture worked so well that the girl looks almost asleep.

Another mystery is linked to the mummy, however.

From surveillance cameras placed in the room, it can be seen that Rosalia opens and closes her eyes many times a day.

There are many assumptions, from lighting effects to the particular conditions of humidity. But Dario Piombino Mascali, conservator of the site, excludes these hypothesis of moisture, and attributes the phenomenon to the body’s change of position when it was moved to the new reliquary.

The light strikes it in a different way, and better illuminates the eyelids that, in reality, have never been entirely closed.

Below you will find a video where you can see little Rosalia open her eyes.