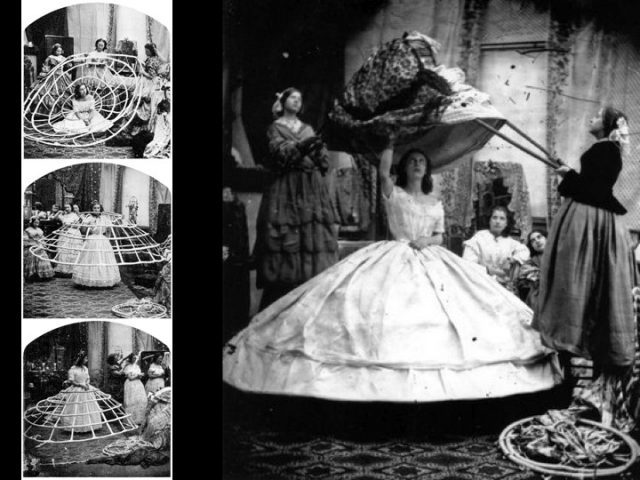 Crinoline is a cage-like structure that used to sit under skirts to support them and make them wider. This fashion, however, cost the lives of about 40,000 women in a single year.

This accessory was very popular in 1800 and was used to make the petticoats and dresses very large. Having a crinoline was essential to be fashionable and all women wanted it.

Crinoline takes its name from the horsehair with which they were making petticoats at that time, thick and fluffy to give clothes volume. In 1860, however, it was replaced by this cage that took its name. This accessory consisted of various circles made of metal or wicker and was used to highlight the narrow waist. At that time, in fact, the corset was also in fashion, although doctors continued to advise against its lethal effects. The corset thinned the waist and women wanted to accentuate this feature by combining large bell skirts. The sermons against these skirts “against modesty” did nothing but make them even more desirable by women.

But why would this simple accessory be so dangerous? It certainly didn’t tighten the ribcage like the dangerous corset.

It was extremely cumbersome and sitting without the crinoline bending outside, showing what was under the skirt, was almost impossible. Not to mention passing through the doors. What made it dangerous, however, was the fact that crinoline was extremely flammable. And it was precisely this characteristic that led to the death of as many as 3,000 women. In 1858 a woman died in Boston because her crinoline caught fire as it was too close to the fireplace. The woman was burned to death in a few minutes. Five years later Margaret Davey, a 14-year-old maid who died of the burns reported, had the same fate.

In England there were 19 “cryoline-related” deaths in just 2 months. One of the biggest problems in trying to save the victims was that, if those present to the accident were only women, they did not dare to approach the victim and trying to help her for fear of catching fire themselves. Not only in England, but also in the United States, the deaths due to crinolines catching fire were high. In a single episode 9 dancers died when the skirt of one of them passed near a candle, setting fire to all those who were near her.

Sometimes the crinolines got caught in wheels and various machines, creating discomfort and sometimes injury. An article in the New York Times reports that in 1864 a total of 40,000 women died worldwide from crinolines that had caught fire.