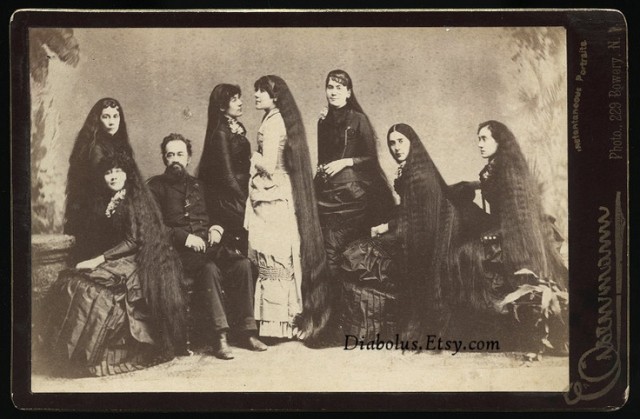 The Sutherland family was made up of father, mother, a son and seven daughters: Sarah, Victoria, Isabella, Grace, Naomi, Dora and Mary. They all lived on a farm founded by their grandfather, in conditions of extreme poverty.

The mother forced her daughters to slather their hair with an ointment that would make their locks grow thicker and faster. The ointment, however, smelled horribly and made the girls very ashamed.

When their mother died they got finally freed from that horrible concoction, which however seemed to have paid off, as all the sisters got in return thick and luscious locks.

The beginning of the seven sisters’ career

After early successes he made them learn to play instruments and forced them to perform around the city together with their brother.

However, people were more attracted to their beautiful hair, which the girls unleashed at the end of each performance for the audience enjoyment, than to their singing talents.

The father realized that he could use his daughters to make some serious money, but also realized that the musical performances would not be enough.

He decided to make hair-growing tonic, based on the ointment previously used by his wife.

In the 1880s, long hair were considered synonym of beauty, at a time when disease made women’s hair to fall out.

This magical lotion promised thick foliage such as the one exhibited by the seven sisters which, when left loose, could even touch the floor.

In fact only one of the sister’s hair was so long to reach the ground from a standing position,

but when they had to take pictures or when they performed those who had shorter hair sat or knelt, giving the illusion that each had locks down to the foot.

The ointment was initially not successful; it became commercially profitable only when the Reverend joined a partner. The business started going very well, the seven sisters turned into celebrities known across America and the family made money hand over fist.

They managed to build a huge house, each one of them had a maid at their disposal who brushed their hair every night and

they took to spending enormous sums of money, even to organize funeral ceremonies for their pets.

One day a young nobleman, Frederick Castlemaine, showed up at their mansion; his purpose was to court Dora, but then decided to marry Isabella, about ten years older than he was.

The other side of the coin

Money, as we all know, is not everything in life and the Sutherland sisters knew it all too well, as after achieving great wealth they ended up living a life of decline.

Naomi got married and had three children but died young, eight years after her wedding.

The other sisters wanted to build a mausoleum in herhonour, instead ended up burying her unceremoniously in the garden of their house.

Frederick turned out to be addicted to opium and morphine, and had another bad habit:

he enjoyed scaring to death poor peasants by shooting at them, and then tried to calm them down compensating them with large sums of money. As he followed the sisters on tour, one morning in1897 he committed suicide.

His desperate wife built a mausoleum for him, but did notdepose the body in it immediately. The sisters put him in a coffin with a glass lid, and every day they would sing for Frederick.

After 10 days the smell was so nauseating that the health authority had to intervene and the body was finally placed in the mausoleum.

Isabella visited him every night for two years until she met another latin lover, Alonzo Swain, also much younger than she was, and ended up marrying him.

Victoria, which had never been considered a beauty, got married at the age of fifty with a boy of nineteen years of age.

Her sisters were so shocked by this act that they never spoke to her again and casted her away.

Mary, the youngest, had always suffered from mental disorders; throughout the years she kept deteriorating until her sisters had no choice but to lock her up in her room.

Isabella died in 1914 and Sarah, the oldest, in 1919. She too was displayed in a glass case before being buried on the orders of the authorities.

So only three sisters were left. The family fortune was fading in part because of a revolution: women began to cut their hair in bobbed hairstyles. Soon it became the main trend and the seven sisters’ ointment lost its fame.

The three surviving sisters then tried to resort to another way of making money and went to Hollywood to sell their story for a movie.

Dora, however, died in an accident while traveling to Hollywood and the film never saw the light of the day.

The two remaining sisters were so broke by then they did not even have enough money to cremate Dora and therefore decided not to claim her body.

They returned to the villa where they tried to keep their activities alive but all their efforts ended definitively in 1936.

Their house burned down and Mary ended her years in an asylum while Grace died aged 92 in 1946, and her body was buried in an unmarked grave.