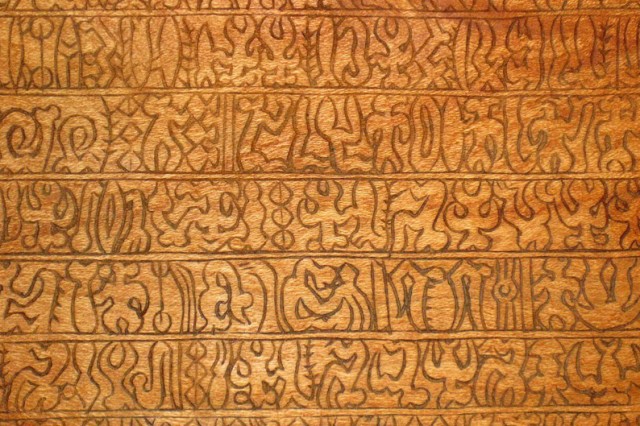 Rongorongo is a writing system discovered on Easter Island.  Found in the nineteenth century, it has not yet been deciphered.

This writing system was found on some wooden boards, discovered for the first time in the nineteenth century. All the engraved wooden boards were donated to museums and there are no more examples of this primitive writing on Easter Island,though on many rocks, including the famous Mo’ai statues, some glyphs can be found.

Despite the efforts made, no one has yet been able to decipher the contents of the mysterious tablets.

This type of writing presents some specific traits, above all the direction of the writing.

It is in factread going from bottom left, towards the right then, once reached the end of the line, the tablet has to be turned 180 degrees and thus continued to be read from left to right.

The glyphs engraved on the tablets are mostly geometric shapes and stylized human forms, animals or plants.

Almost all the symbols that represent humans or animals have their heads turned upwards and, if they are represented by profile, they are facing the direction of the writing.

There are anthropomorphic figures, fish, turtles, birds and local plants and only a few of these are similar to the symbols found on the island rocks.

Where does Rongorongo come from? 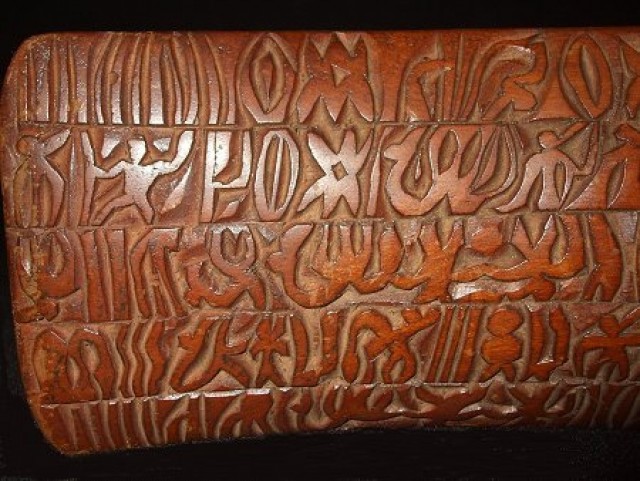 According to the legend, the founders of the Rapanui civilization brought plants on the island. Along with these plants they also carried 67 tablets from their homeland.

However, there is no historical evidence that other Polynesian and South American civilizations have created a writing system,which was then exported to Easter Island.

The most plausible hypothesis is therefore that a writing system was created after the arrival of the first settlers in the seventeenth century or so.  Rongorongo must have developed on the island on its own, without been imported from other civilizations.

If so, Rongorongo would be one of the few examples of writing system independently invented.

The development of agriculture on Easter Island is traced back to about 1200; we can therefore assume that Rongorongo came after that date.

One of the tablets was examined using Carbon 14 dating tests with and although it wasn’t possible to establish a precise date, it was determined that it definitely dated later than the year 1680.

supposedly represents the Easter Island palm, extinct in 1650 following the deforestation perpetrated by the natives. It is therefore plausible to admit that it was invented in the seventeenth century.

The discovery by Westerners 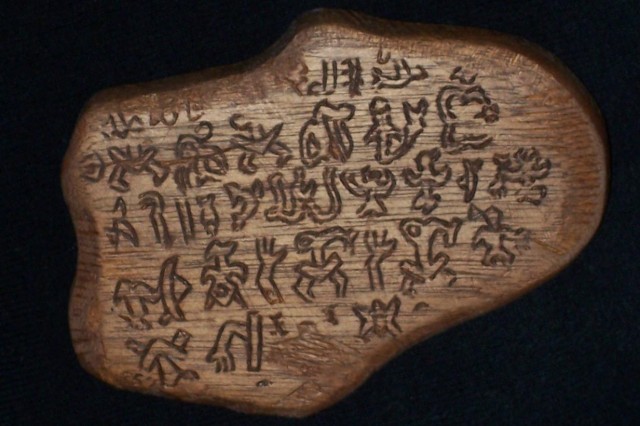 Despite some mentions on the writing system of the natives in 1770, the first tablets were discovered in 1864 by Eugene Eyraud, who had gone to the island to evangelize the natives.

In a paper he told that every house hadtablets with incised glyphs, each one with a name. However the natives did not give much importance to these symbols, suggesting that they a primitive writing now forgotten.

During the 1860s many raids were carried out on the island by Peruvians in search of slaves. These raids killed many people, drastically decreasing the people who could master this type of writing.

Over time the tablets started to be seen as ornaments and sometimes burned by the natives when they needed firewood. This is precisely why the tablets are so few in number.

Currently there are 26 existing ones, but only half of these are of known origin and in good condition. This scarcity is one of the factors why translating these texts is so difficult.

Thus Rongorongo writing still remains, up until now, a great unsolved mystery perhaps only comparable to that of the Voynich manuscript