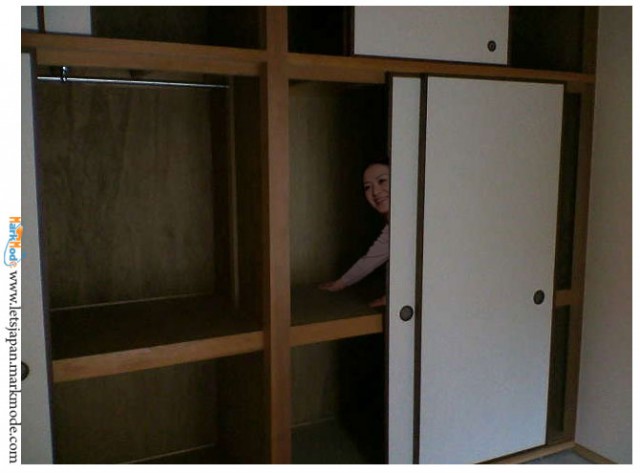 You know the strange feeling you sometimes have of being observed?

Most of the times it is just a bad feeling, but sometimes your instinct isn’t wrong. That’s what happened to a Japanese man who had a bad surprise in his closet.

In 2008 in Kasuya, a small Japanese town, a 57 year old man begins to notice that small amounts of food mysteriously disappearing from his refrigerator.

At first he thought that maybe he was wrong and he was mistaken while counting his supplies, but when he began to write the exact amount of food left in the fridge every day he realized that something was wrong. The food was indeed missing. He then thought of being the victim of some petty thief and decided to install a camera at home connected to his mobile phone in order to monitor the apartment while he was out.

The day after the camera got installed, while he was out, he saw someone wandering around the kitchen.

He called the police right away so that they would go to check. They found the house locked and no signs of forced entrance at the door or the windows. They went in and began to search the house, looking everywhere to see where a person could hide.

The woman in the closet

When they opened a closet, which the man used to keep blankets and futons, they found a surprise:

on one of the shelves there was a woman, all curled up.

She was Tatsuko Horikawa, a homeless woman who said she did not have a place where to live. She had managed to enter the house after the owner had gone out without locking the door.

Horikawa said that she had been living in the closet for about a year, eating whatever was in the refrigerator, using the bathroom and having showers.

The woman was in fact described as “clean and tidy” from the policeman who found her. Even after all this, it does not seem that the woman has never stolen money or other items from the house where she lived in hiding. She simply needed a place to live, if only the shelf of a closet.

The woman, however, was arrested for trespassing and is suspected to have been living in other homes in the area.

This story gave me the creeps and from now on I will always check every closet and under the bed before going to sleep!