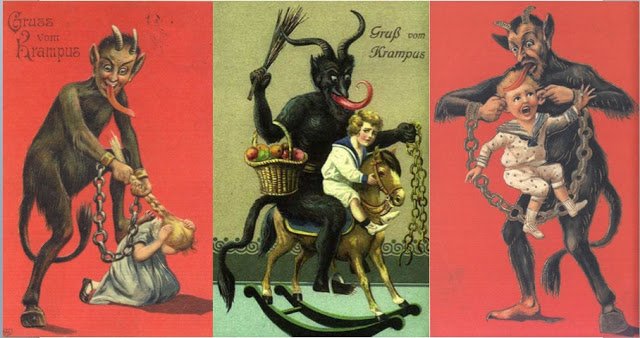 December has arrived and Christmas is near. The streets are full of small colored lights, everyone rushes to buy gifts and then, you know, at Christmas we are all better people. If you are not, then it’s too bad for you because Santa Claus is not that nice little man who distributes gifts to everyone, even to those who were naughty.

Santa Claus has for helpers the Krampus, the demons that look like goats, armed with whips to flog those who did not behave well. I’m screwd, I know that, But will you manage to escape?

Everyone knows that the figure of Santa Claus derives from Saint Nicholas of Myra, a Christian bishop of the IV century. One day, he learned that a man had three daughters who could not marry because they did not have a dowry, so he wanted to initiate them into prostitution.

Nicholas then took some money and put it in three bags, which he threw in the man’s house at night,saving the three girls from a sad fate.

It is also said that he was the author of a miracle and that herevived three children killed by an evil butcher who wanted to sell their meat. This is why he is considered the protector of children.

In the Nordic countries he is celebrated on December 6th and during the vigil, it is said that Saint Nicholas visits the good children to give them sweets and toys.

From here, it was then drawn the current image of Santa Claus as a chubby grandfather, dispenser of gifts. But is this actually true?

In some versions, Santa Claus (or Saint Nicholas) is accompanied by the krampus, demons that look like goatmen that follow and help Santa Claus, whipping naughty children.

But how did this version rise?

It is said that long ago, in the mountain countries, during a long famine some boys began to raid neighboring villages, disguised with skins and horns to scare people.

But one day, they noticed that among them there was the devil himself, who was discovered because of its cloven feet. They asked thenfor the help of Saint Nicholas who rescued them from the devil, taking the kids with him as helpers.

The krampus, armed with whips and chains, would whip naughty children.

This tradition is still alive in many Nordic countries and in some Italian areas. On the night of December 5 a parade is held where Saint Nicholas distributes sweets in the streets of the city followed by his krampus.

I recommend you, don’t be naughty!