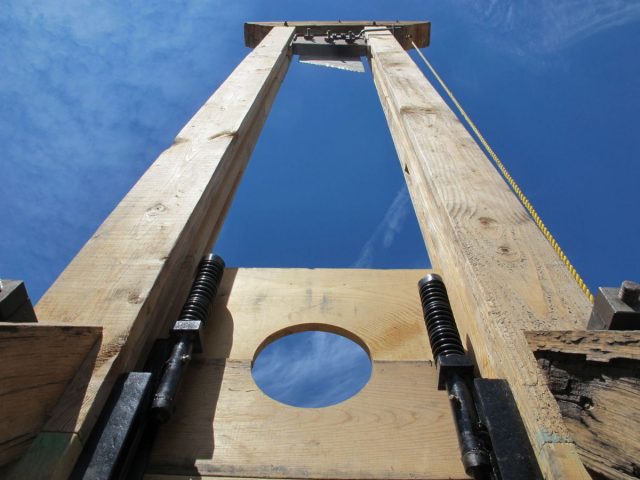 The guillotine was a method of execution and death penalty in force in various countries such as France, Italy, England, Belgium and Sweden.

Decapitation as a method of execution goes back long before the invention of the guillotine and was performed with swords or axes.

This instrument became popular starting 1792 in France thanks to the French Revolution, but other countries already used a very similar system to carry out executions.

This is because during normal executions, performed with a sword or axe, the prisoner had to remain perfectly still on the stump, and collaborate to allow the Executioner a clean cut; otherwise the Executioner could miss the blow and hurt the victimby cutting them on the shoulder or the face, causing them unnecessary suffering. But staying calm on a scaffold must have been very difficult and many of those executed were shaken by strong tremors and some even tried to escape.

Hence all over Europe machines that require immobilization of the neck of the person to be executed began to spread.

An example is the Halifax scaffold widespread in England or the cleaver in Italy, both precursors of modern guillotine that differ from this mainly because of the blade shape.

The inventor of the guillotine is a Frenchman but he is not, as many believe, Joseph Ignace Guillotin,

but Antoine Louis who, with the help of engineer German Tobias Schmidt, built the first prototype of the guillotine, called at that time “Louisette” by the name of its inventor.

The guillotine took its final name, with which it is known today, by Guillotin, a deputy in the General Assembly who, opposed to the death penalty, in 1789 proposed a method of performing executions in the less bloody way possible and that would be equal for every offense and every person of any social class.

From 1793-1794, during the Reign of Terror, the Revolutionary Court sentenced thousands of political opponents to the guillotine.

The first to be executed was Collenot D’Angremont, in 1792, while the last execution by guillotine in France was that of Hamida Djandoubi in 1977.

The last execution by guillotine in public was the one of Eugene Weidman and dates back to 1939. You can see it in the video at the end of this article.

The head after the beheading 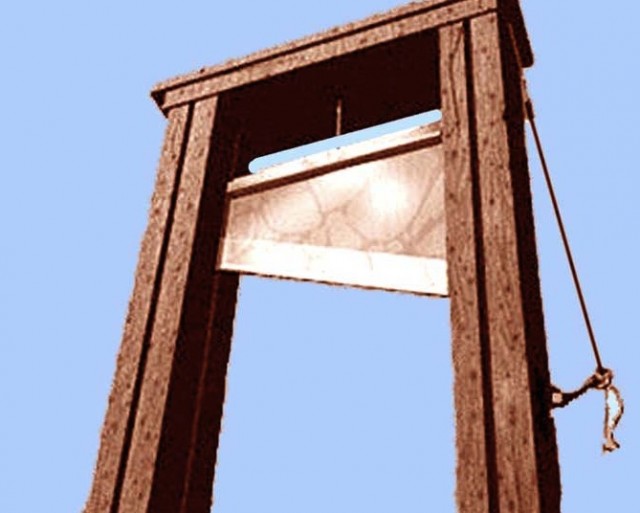 The guillotine, as already mentioned, was invented to lessen the suffering of people who had being condemned to death.

But what happened to the severed head?

With the guillotine the separation of the head from the body is immediate and does not bring damage to any part of the body, not even to the head.

Many viewers swear they saw heads moving their eyes and eyelids and others claim even hearing them make sounds.

In this regard I would like to mention the experience of Dr. Beaurieux who in 1905 carefully studied this phenomenon.

“This is what I observed immediately after the decapitation: the eyelids and lips of the beheaded keep moving for about five or six seconds due to rhythmic contractions. This phenomenon has been noticed by all those who have found themselves in my position of observing this phenomenon…

I waited several seconds. The spasmodic movements are over. […] It was then that I called, loud and clear, “Languille!” I saw his eyelids open, without any spasm – detail on which I insist – but with only one motion, quite normal, as it happens every day when someone wakes up.

Subsequently Languille’s eyes are fixed permanently in my eyes and the pupils are focusing on things. I was in the presence of the vague and devoid expression that is observed in people while they are dying. I was dealing with bright eyes that were watching me. After a few seconds the eyelids shut again.

At that point, I called him again and again, without any spasm, slowly, the eyelids lifted and no doubt a pair of bright eyes stared into mine […]. Then his eyelids closed again. I tried to call a third time but there was no more movement. “

This experiment was conducted by several other doctors until 1956. The proofs, however, are only anecdotes. It seems that the loss of blood pressure from the brain causes loss of consciousness and death after a few moments.

Here you can see the video of the last public execution by guillotine in France, dating back to 1939.