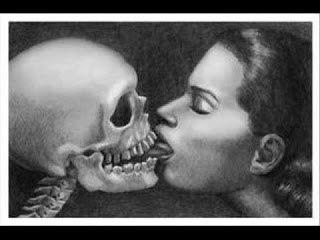 A Swedish woman of 37 whose name was not revealed, was arrested in September 2012 for having had sex with skeletons.

The discovery of the skeletons

The discovery by the police was completely random: the neighbors had called the police because they had heard noises, they thought they were gunshots, coming from the apartment of the woman in Gothenburg, Sweden.

Once they entered to check, they found the house was full of bones. There were at least six skulls and a spine as well as numerous other bones.

The woman says she’s not a necrophiliac in spite of the fact that in her house the police also found pictures of her while kissing a skull, photos of bones in various parts of the house, including her bed, and two DVDs titled “My necrophilia” and ” My first time “, full of explicit images.

The photo of the woman with skeletons

Some of the photos found depict the woman as she hugs, kisses and licks the bones but the defendant denies being the subject of the photo, saying that she found them on the internet.

She has not been accused of necrophilia but “disturbance of peace of the dead” and was sentenced to two months in prison.

The woman has been subjected to a psychiatric evaluation but was not considered mentally ill, at least not in the legal sense of the term.

She is fascinated by death and in her apartment, in addition to bones and photos of women who have sex with bones, photos of churches, morgues and cemeteries and documentaries that explain how to have sex with dead people were also found.

Katarina Öberg, the head of Sexual Medicine at Karolinska University Hospital department, in Stockholm, said she has never had to deal with similar cases and that she had never heard such cases happening in Sweden.

Also in her apartment a drill, knives and used bags to carry the corpses were found, hidden.

After allegations the woman admitted to having had at home many human bones, but stated that it was because ofher historical and archaeological interest and not because she is a necrophiliac.