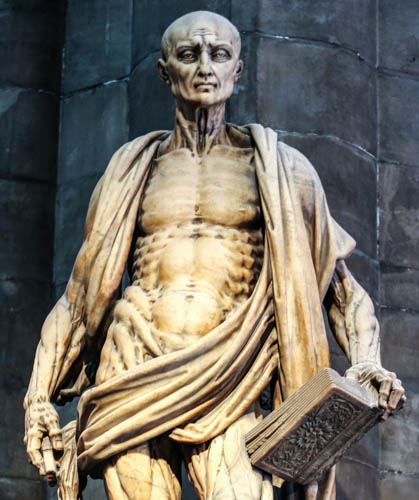 Skinning was a torture method used in various civilizations throughout history and it involves removing a portion of skin from a human being while still alive (although in some cases it is carried out post-mortem) and trying to keep intact the portion removed.

The dermatologist Ernst G. Jung says that the main causes of death due to skinning are: shock, hypothermia, bleeding and infections. The death of the subject is not immediate, but it could take anything from a few hours to a few days.

Jung wrote an essay on the subject called “Kleine Kulturgeschichte der Haut” (“A short cultural history on the skin”), which describes the practice during the Assyrian civilization. In the Assyrian tradition we find reference of the skinning in inscriptions and royal edicts.

From these sources we learned that skinning could start to be done at various points of the body, such as the ankle, the leg or the back.

Even in the history of China skinning had been used by various emperors; in particular, in 1396, Emperor Hongwu ordered to flay 5000 women.

Throughout history we have other examples of skinning as a method of execution. In 1303 the treasurer of Westminster Abbey was robbed while carrying a large sum of money belonging to the king. Some monks were investigated of the crime, three of them were found guilty and flayed alive. Their skin was then hang on three doors as a warning.

You want to know more about ancient methods of torture? Check this out: Rack, Rope and Red-hot Pincers: A History of Torture and Its Instruments. A book written by a retired Warder of the Tower of London who studied in detail torture methods.

In some cases the skinning is conducted after death, as a sign of contempt toward the body or for religious reasons.

The latter is the case of the Aztecs who flayed the victims used for human sacrifices.

This practice was also used in Europe during the Middle Ages, on the corpses of those who were considered traitors.

Removing the scalp is also considered a type of skinning; this treatment was inflicted on the corpses of enemies by several civilizations.